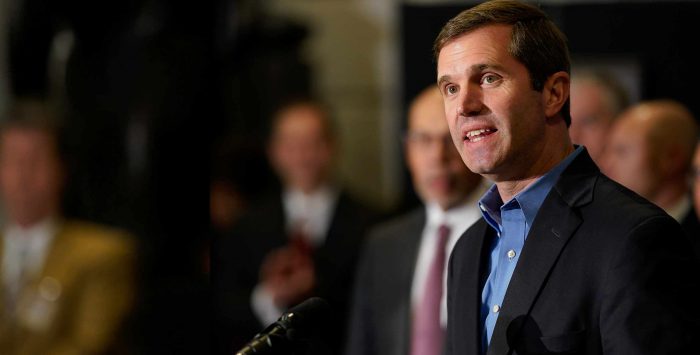 Gov. Andy Beshear has announced that Kentucky is beginning the process of transitioning the state's health insurance marketplace back to a fully state-run exchange. | Image of Beshear (November 15, 2019) REUTERS/Bryan Woolston

Americans who have lost their health insurance amid the COVID-19 pandemic have access to special enrollment periods during which they can enroll in a self-purchased health plan (and in the majority of the states, people experiencing significant income drops may be eligible for Medicaid, although that’s not as widely publicized as it could be).

But 12 of the 13 fully state-run health insurance exchanges opted to open up their enrollment platforms for anyone who was without health coverage, regardless of whether they had a qualifying event (such as losing other health coverage). Several of those enrollment windows have now closed, but they’re ongoing in five states and Washington, DC, and there have been several recent extensions. Last week, New York and Vermont extended their COVID-19 special enrollment periods. Maryland soon followed suit, and now Massachusetts and California have also extended their COVID-19 special enrollment periods.

Oklahoma voters will decide Medicaid expansion next week; if the measure passes, it will eliminate OK’s coverage gap

Oklahoma’s primary is next Tuesday, June 30, and voters will decide whether or not the state expands Medicaid. Oklahoma is currently one of 14 states where Medicaid has not been expanded. As a result, there are about 95,000 residents who simply have no realistic access to health coverage at all. Medicaid expansion would resolve that problem.

At least 200,000 Oklahomans would become newly eligible for coverage if Oklahoma voters pass the Medicaid expansion ballot initiative (State Question 802), although this number is likely higher now that the COVID-19 pandemic has resulted in so many job losses. Regardless of how many Oklahomans gain coverage under Medicaid expansion, the federal government will pay 90 percent of the cost.

There are obviously concerns that the ongoing pandemic could hamper voter turnout in Oklahoma next week, but Medicaid expansion is crucial for the state’s healthcare system. It’s worth noting that Maine, Utah, and Idaho have all expanded Medicaid because of similar ballot initiatives, and Nebraska’s Medicaid expansion, which takes effect this fall, is also the result of a successful ballot initiative.

Kentucky plans to revive the Kynect enrollment platform by Fall 2021

From 2014 through 2016, Kentucky’s state-run health insurance exchange, Kynect, was one of the nation’s most successful. But former Gov. Matt Bevin – who took office in 2015 – dismantled the Kynect enrollment platform and transitioned Kentucky to HealthCare.gov starting in the fall of 2016. Bevin lost his re-election bid in 2019, and his successor, Andy Beshear, announced last week that Kentucky is beginning the process of transitioning back to Kynect.

The state plans to stop using HealthCare.gov in the Fall of 2021, so when residents are enrolling in coverage for 2022, they will once again use a fully state-run exchange. Carrie Banahan, who previously led Kynect, is in charge of the transition back to the state-run system. Switching back to Kynect will save money, but it will also give the state control over exchange operations, including, for example, the ability to extend open enrollment or establish special enrollment periods.

Friday Health Plans is a Colorado-based health insurer offering ACA-compliant health plans. For 2021, they are expanding to offer coverage on-exchange and off-exchange in Texas, New Mexico, and Nevada. Friday’s provider website indicates that they’re currently accepting applications from providers in Colorado, Texas, and New Mexico who wish to join their network. As is often the case when an insurer offers plans in multiple states, each state will have its own provider network. So members will need to receive non-emergency care from a Friday network provider in their own state.

It’s still early in the rate- and form-filing season for 2021 coverage, but we’re seeing a trend towards increasing insurer participation in the exchanges and expanding coverage areas. This is a continuation of a trend that’s been ongoing for the past couple of years. There were widespread insurer exits from the exchanges in 2017 and 2018, but that turned around starting in 2019.

HealthCare.gov did not open up a COVID-19 enrollment window to allow people without insurance to get coverage, but people who have qualifying events – including loss of another health plan – are able to enroll in a plan through the exchange in any state. My1HR, a cloud-based direct-enrollment web broker platform, works with brokers to get people enrolled in plans through the federally run exchange. My1HR President, Dave Keller, reports that enrollment since the beginning of April is up 38 percent over the same time period last year.

Keller notes that My1HR is also seeing an increase in the number of enrollees whose after-subsidy premium is less than $1/month, amounting to 54 percent of their enrollees in 2020 – up from 43 percent in 2019. (Premium subsidies get larger as income gets smaller, so it makes sense that net premiums would drop due to pandemic-related income reductions in 2020.)

The Trump administration has thus-far refused numerous states’ requests for a COVID-19 special enrollment period on HealthCare.gov. Last week, the city of Chicago filed a lawsuit, arguing that the pandemic should trigger an exceptional circumstances special enrollment period nationwide. The lawsuit notes that expanding access to health coverage (by allowing uninsured people to enroll through HealthCare.gov) is a crucial part of the response to the pandemic, and will help states control the spread of the virus.

This week, attorneys general from 14 states, including eight that use HealthCare.gov, filed an amicus brief in support of Chicago’s lawsuit. The attorneys general note that it would be beneficial to public health to allow uninsured residents to enroll in health plans via HealthCare.gov. They also point out that many Americans who opted to go without health insurance when the ACA’s individual mandate penalty was eliminated (a GOP decision) may now realize that was a poor decision. But unfortunately, their ability to adjust course and enroll in health coverage depends on where they live. Chicago’s lawsuit and the amicus brief are an effort to end that disparity.

Earlier this month, the Trump administration finalized regulations that roll back Obama-era protections against healthcare discrimination, particularly for the LGBTQ population. But a few days later, the Supreme Court issued a landmark ruling that protects the LGBTQ community from workplace discrimination. Despite the Supreme Court’s ruling, the Trump administration has not rescinded its rule, which is scheduled to take effect in late August.