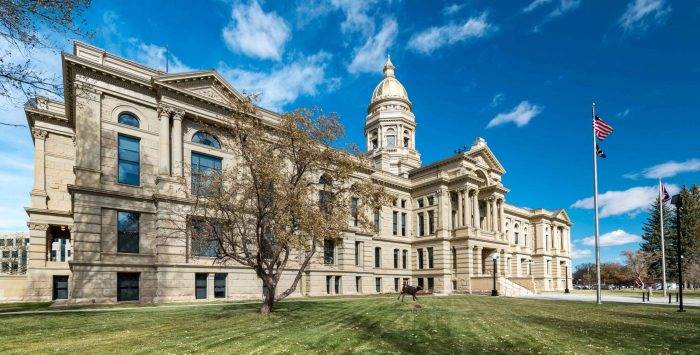 Wyoming lawmakers have voted to have a legislative committee discuss and study Medicaid expansion for the state. | Wyoming Capitol Building photo: rruntsch / stock.adobe.com

The COVID-19 special enrollment period in Nevada will end this Friday, May 15. After that, residents in Nevada will need a qualifying event in order to sign up for a health plan, as is the case in most other states. The loss of employer-sponsored health insurance is a qualifying event, so people who lose their coverage amid the pandemic will still be able to enroll in a new plan.

Vermont’s COVID-19 special enrollment period had also been scheduled to end on Friday, but it has been extended through June 15.

After Friday, COVID-19 enrollment windows will continue for uninsured residents (without qualifying events) in Maryland, Massachusetts, New York, California, Vermont, and the District of Columbia.

Colorado’s insurance commissioner, Michael Conway, is asking Colorado’s congressional delegation to push for a federal reinsurance program as part of the next bill to provide COVID-19 relief. Conway’s letter highlights the progress Colorado has made in fostering a stable individual insurance market and low uninsured rate, but notes that a federal reinsurance program could do even more to strengthen the individual market and make coverage more affordable.

Insurers in Vermont propose modest rate increases, despite uncertainties due to COVID-19

Insurers submitted 2021 rate filings for individual market plans in Vermont this week, and David Anderson has an excellent overview of how the state’s two insurers are approaching the cost uncertainties presented by COVID-19. Both insurers have proposed single-digit average rate increases: 6.3 percent for Blue Cross Blue Shield of Vermont, and 7.3 percent for MVP.

In terms of COVID-19, Blue Cross Blue Shield of Vermont is projecting that the disease will not have any significant effect on their costs in 2021, while MVP is projecting roughly a $10 per member per month increase in costs due to COVID-19 (a combination of vaccine costs as well as increased elective procedures in early 2021 to compensate for the procedures that have been delayed this year amid the pandemic).

For perspective, MVP’s current overall premiums are lower than BCBSVT’s, and that will continue to be the case if the proposed rate changes are approved. Vermont is a unique state in that the entire state is one rating area (so premiums don’t vary from one area of the state to another), and premiums also do not vary by age. BCBSVT has a lower-cost catastrophic plan, but MVP’s metal level plans are all priced quite a bit lower than BCBSVT’s.

UnitedHealthcare offered coverage in Maryland’s exchange from 2014 through 2016, but left after the end of 2016, as the carrier did in many states. For 2021, however, the insurer has filed plans to rejoin Maryland’s exchange, and will offer coverage alongside CareFirst BlueCross BlueShield and Kaiser Permanente.

Last month, numerous auto insurers announced they would send rebates to policyholders because Americans are driving much less and thus having fewer car crashes. Some health insurers are now getting on board with that idea, as overall medical claims have dropped due to canceled elective services.

Under normal IRS rules, employers are not allowed to let their workers make health insurance coverage changes outside of open enrollment unless the worker experiences a qualifying life event. So in general, employees cannot enroll in or disenroll from their employer’s plan midway through the plan year without a qualifying event, nor can they switch from one plan option to another. But to address the COVID-19 pandemic, the IRS published rule changes this week that relax those rules, allowing (but not requiring) employers to give their employees mid-year flexibility to enroll, disenroll (if they gain access to a different plan) or switch from one plan to another.

The new rules also allow employees to make mid-year changes to their FSA (flexible spending account) contributions, which is normally not allowed. And for those with FSA plan years or grace periods that end in 2020, the IRS is allowing the employer to give enrollees until the end of 2020 to use their remaining FSA funds. The normal “use it or lose it” rules for FSAs do not allow account holders to use funds past the end of the plan year or grace period, but the IRS is letting employers provide some flexibility here as well.

Wyoming is one of 14 states where Medicaid eligibility has not been expanded, meaning that there’s a coverage gap for residents who earn less than the federal poverty level. Last fall, Wyoming’s Joint Revenue Committee voted in favor of Medicaid expansion, but the bill died in committee on the first day of the 2020 legislative session. The COVID-19 pandemic has changed the circumstances, however, as many previously employed Wyoming residents are now without a job – and in many cases, newly uninsured. Last week, Wyoming lawmakers voted to have the Joint Revenue Committee once again consider Medicaid expansion. The committee could spend the next several months on the issue, but lawmakers also noted that it might be brought up as soon as the special session that’s tentatively scheduled for late June.

Last week, HHS finalized the 2021 Notice of Benefit and Payment Parameters. This annual rule-making document covers a wide range of issues related to the insurance markets, and is summarized here, here, and here, by Katie Keith.

Each year, HHS uses the Benefit and Payment Parameters to issue maximum out-of-pocket limits for the coming plan year. For 2021, the limits are $8,550 for a single individual and $17,100 for a family (up from $8,150 and $16,300 this year). These limits apply to all non-grandmothered, non-grandfathered plans, for any in-network treatment of essential health benefits. Many insurers offer plans with maximum out-of-pocket limits below these levels, but they cannot be higher.

HHS has also finalized a new special enrollment period for people who are enrolled in a Silver plan with cost-sharing reductions but then experience a change in income that makes them newly ineligible for cost-sharing reductions. This rule won’t take effect until 2022, when it will allow people in this situation to switch to a Bronze or Gold plan. (Currently, they can only switch to a different Silver plan.)

One fairly drastic change HHS had proposed was not finalized: The proposed rule change would have eliminated premium subsidies for people with $0 (after-subsidy) plans whose coverage auto-renewed. The idea was to require people to return to the exchange each year to redetermine their subsidy eligibility, but this proposal received overwhelmingly negative public comments and HHS opted to not finalize it. So auto-renewal with premium subsidies will continue to be available, even for people whose subsidy covers the full cost of their plan. (Premium subsidies always have to be reconciled with the IRS after the end of the plan year.)