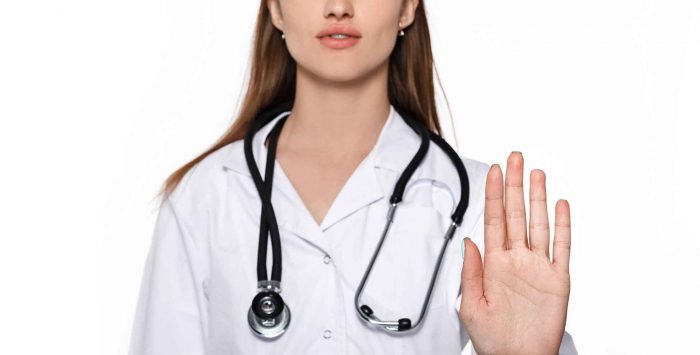 If you want to continue working with your doctor, you can ask her what health insurance carriers she's contracted with, and select a policy from among the ones she mentions. | Image: producer / stock.adobe.com

If you want to continue working with your doctor, you can ask her what health insurance carriers she's contracted with, and select a policy from among the ones she mentions. | Image: producer / stock.adobe.com

My doctor posted a sign saying she ‘doesn’t take Obamacare.’ What should I do?

Home > FAQs > My doctor posted a sign saying she ‘doesn’t take Obamacare.’ What should I do?

Q. My doctor posted a sign saying she ‘doesn’t take Obamacare.’ What should I do?

A. It depends on your relationship with your doctor. If you’re not particularly attached to her, it might be easier to just find someone new. But if you prefer to continue working with her, you’ll need to have a conversation with her or with her office staff to determine what carriers she still has network contracts with.

Obamacare is not an insurance policy or network. It’s just another name for the Affordable Care Act (ACA), which is a law that was enacted in 2010. All new individual and small-group health insurance policies had to be fully compliant with Obamacare starting January 1, 2014. This is the case regardless of whether they’re sold through the exchanges or purchased directly from a carrier (ie, “off-exchange“). The ACA also imposed some new regulations on large group and self-insured plans, but not as extensively as it regulates the individual and small group markets.

Grandfathered health plans are those that were in already in effect on March 23, 2010 (when the ACA was signed into law), and they do not have to become fully ACA-compliant as long as they don’t make significant changes to benefits or cost-sharing (even grandfathered plans do have to comply with some ACA provisions, though).

Transitional, or “grandmothered” health plans are those that were purchased after the ACA was signed into law, but before October 1, 2013 (December 31, 2013 in some states). HHS allowed these plans to extend into late 2014 if states and carriers permitted it, and then later provided additional leeway, ultimately allowing these plans to continue to remain in force (currently through 2022), at the discretion of states and carriers. These policies do not have to be fully ACA-compliant, but they must adhere to more provisions of the law than grandfathered plans.

So there are still some health plans that are not fully compliant with Obamacare. But if a doctor hangs a sign saying that she’s “not taking Obamacare” it probably means one of three things:

In many states, health insurance carriers sell the exact same plans on and off-exchange. But in some cases, policies are sold with different provider networks depending on whether the policy is sold through the exchange. It’s possible that your doctor is not included in the networks for exchange plans, and that when she says “Obamacare plans,” she’s referring to plans sold through the exchange.

In some states, the networks are the same on and off-exchange and there would be no way for a doctor’s office to know how the policy was obtained. Of course, there are also many policies that are sold only through the exchanges or only outside the exchanges. For those plans, it’s obvious whether they were purchased on or off-exchange. Exchange plans in Texas must include the designation “QHP” on ID cards, and some states put an “X” on the ID cards for exchange plans. In California, Anthem’s ID cards have the Covered California logo if the plan was purchased through the exchange.

If you want to continue working with your doctor, you can ask her what health insurance carriers she’s contracted with, and select a policy from among the ones she mentions. Situations like this are not as common as they were in 2014, but changes like the ACA often have a steep learning curve, and all of us – including doctors – have to make our way along that curve. 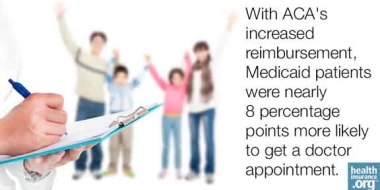 Study: The doctor is more likely to see you now

For reasons that baffle me, ACA made Medicaid's enhanced reimbursement temporary. It expired December 31. Fifteen states plan to use their own money to continue the effort. Interestingly enough, some ... 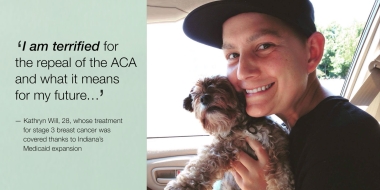 While policy wonks analyze the political challenges of repealing Obamacare, millions of Americans who rely on it to help pay for lifesaving medical treatments are panicking.
0 0 votes
Article Rating
Subscribe
4 Comments
Oldest
Newest Most Voted
Inline Feedbacks
View all comments

Insurance companies are rebelling and not paying the Doctors to see ACA patients! We get no care.even though we are paying a premium.

This is not correct. If a doctor is in-network and all normal protocols are followed (prior authorization, referrals, etc.), the medical providers treating individual/family enrollees get paid just as they would with any other type of coverage.
If the health plan covers out-of-network care, that also works just like it would with any other type of plan (although individual/family plans that cover out-of-network care are much less common than individual/family plans that require patients to stay in-network).

It is quite common for an insurer to have different provider networks for different plans. This is particularly true for employer-sponsored plans versus individual/family plans. So for example, a doctor’s office might be in-network with some of an insurer’s plans but not others. And individual market plans are much more likely to be HMOs and EPOs with somewhat narrower networks.