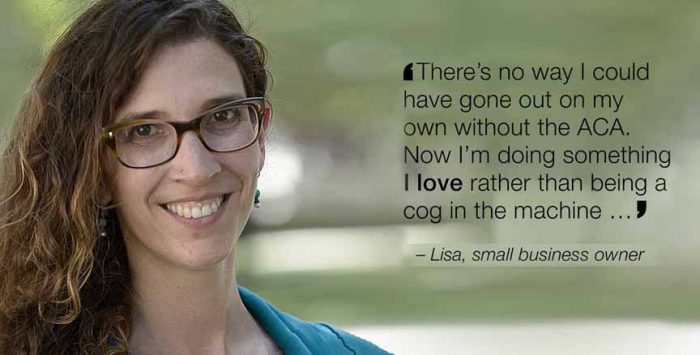 Back in the days before the Affordable Care Act (ACA), fear of losing insurance benefits kept far too many people stuck in jobs they didn’t like, jobs that didn’t pay enough or jobs that didn’t let them pursue their professional passions.

Fortunately, those days are gone. No one has to be stuck in a dead-end job just to keep their health insurance. Thanks to the ACA, anyone can enroll in coverage through the health insurance marketplace within 60 days of losing health insurance coverage, even if they leave their job by choice.

Free from fear of coverage denial

Maria is an excellent example. When she left a job that provided health insurance to accept a much more exciting opportunity at a job that didn’t offer coverage, she wasn’t worried for a moment about getting covered — even though she has a pre-existing condition.

“I didn’t go a single day without coverage because I knew what my new salary would be, so I could go ahead and sign up,” Maria says. “I didn’t have to wait for my new job to start, which was awesome.”

Thanks to Obamacare, Maria found a plan that was actually better than the one she had through her previous employer, with a reasonable premium and deductible and prescription coverage that was less expensive overall.

Maria appreciated not feeling trapped in her old job, because having insurance options gave her the freedom to take the new and better opportunity. About eight years earlier, she had been in a job she hated but couldn’t leave because health insurance was out of reach financially. The best she could do with a pre-existing condition was a catastrophic plan for $75 a month that “covered almost nothing” with a $10,000 deductible. She stayed in that job for a year and a half, a choice she wasn’t forced to make this time.

“As a public librarian, most positions are part-time. I could have left my full-time job with benefits and combined a couple of part-time jobs — and still would have been able to afford insurance,” Maria says. “The ACA made that a much more viable option. I have always been Team Obamacare, but my experience still exceeded my expectations.”

Free to pursue a dream career

Maria is just one of millions of people who have freedom they didn’t have before Obamacare — like Lisa, who was able to start her own business because she wasn’t tied to a job just for the benefits.

Before the ACA, Lisa had a job in marketing, but working for others wasn’t as satisfying as she would have liked. “I never felt fulfilled,” she says. “I was always a writer first but I didn’t know how to make a living out of it.”

Finally, Lisa decided it was time to get unstuck and start her own writing business. All she needed was health insurance.

“I have chronic conditions, so I’d been turned down for insurance before,” she says. “There’s no way I could have gone out on my own without the ACA. Now I’m doing something I love rather than being a cog in the machine, and I have better job security than someone changing jobs every couple years because they’re bored and unhappy.”

And then there’s Shawn, who says he has worried about health insurance since he was diagnosed with type 1 diabetes at age 10. He knows his father stayed with the same job so he wouldn’t lose the health insurance his family needed, so Shawn wondered what would happen once he was no longer covered by his parents’ plan.

Shawn doesn’t have to think twice about that anymore thanks to Obamacare. Earlier this year, he moved across the country to accept an exciting career opportunity as a sports and entertainment marketing professional. The only thing it didn’t offer was health insurance.

“Without the ACA, I wouldn’t have felt confident enough or financially secure enough to make this leap,” Shawn says. “Living with type 1 diabetes is expensive, so I can never go without coverage.”

Shawn had insurance at the job he left, but before that — and before the ACA — he had to do without coverage for about five months. Some insurance companies denied him altogether because he has type 1 diabetes. Other insurers charged so much, Shawn just couldn’t afford it.

Because he changed jobs, Shawn was eligible to enroll within 60 days, even outside the open enrollment period. He found a plan that was a great fit for his needs, including paying 90 percent of the costs of the insulin pump and supplies he depends on to manage his diabetes and stay healthy.

“Those supplies are very expensive without insurance,” he says, “so that’s a big deal.”

Shawn says that without the ACA, he never would have been able to move across the country to pursue a career opportunity like the one he was offered.