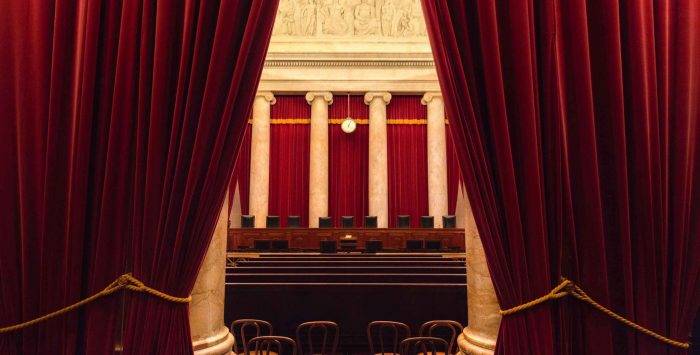 The Supreme Court heard oral arguments in California v. Texas this week, but a ruling is not expected until Spring 2021. | Image: Clinton / stock.adobe.com

The Supreme Court heard oral arguments in California v. Texas yesterday. You can listen to the arguments on C-Span, or read some of the excellent live-tweeting threads, including one from SCOTUSblog and another from Matthew Cortland, an attorney and healthcare/disability rights activist. And at Health Affairs, Katie Keith has a detailed overview of the case itself.

We won’t have a definitive answer from the justices until sometime next spring, and it’s always wise to remember that we can’t draw precise conclusions from oral arguments. But the general consensus is that it appears that the Court will uphold the ACA. This is the perspective taken by a wide range of experts, including SCOTUSblog, right-leaning law professor Jonathan Adler, and Andy Slavitt, who served as the acting head of CMS during the Obama administration.

But it will be several months before we know for sure how this case will end. Between now and then, the Biden administration will take office but will not be able to do anything unilaterally to protect the ACA from this lawsuit. And because of financial constraints, state governments – even those that have taken steps to enshrine various ACA consumer protections into state law – would not be able to protect the millions of Americans who rely on expanded Medicaid and premium subsidies. But if Democrats win both seats in Georgia’s runoff Senate elections in early January, it’s possible that a 50-50 Senate, together with the House, could work out legislation that could prevent millions of people from losing their health coverage in event that the Supreme Court does end up invalidating the ACA.

It also has to be noted, however, that even though the prospect of the ACA being overturned appears somewhat unlikely at this point, the impact of a ruling against the ACA would be devastating. And it would likely be felt almost immediately (ie, by mid-2021) if nothing can be done legislatively to protect the ACA.

Open enrollment updates: Nothing has changed due to SCOTUS case

The ACA has been in the news constantly in recent days as a result of the California v. Texas lawsuit – this is the third year in a row that this lawsuit has caused heightened anxiety during the open enrollment period about the future of the ACA. (During the previous two open enrollment periods, Americans were awaiting lower courts’ rulings in the case; they came in December both years.)

But despite the uncertainty that the lawsuit is causing, nothing is changing about the enrollment process for 2021 coverage, or the availability of financial assistance for the health plans that take effect January 1. Open enrollment is underway nationwide; if you need to buy or renew your own health coverage for 2021 and haven’t yet begun the process, check out our guide to the current open enrollment period for answers to your questions.

It’s early in the open enrollment window, so we’re still waiting for widespread data in terms of how many people are enrolling. But HealthSherpa, an enhanced direct enrollment web broker that only sells ACA-compliant coverage, announced that they had enrolled over 200,000 people in the first six days, and that 95 percent of them had qualified for premium subsidies. They noted that the enrollment volume was nearly double what they had in the same time period last year.

And two of the fully state-run exchanges have put out enrollment reports so far: Connecticut’s exchange reported 1,279 new enrollees in the first six days, and Washington’s exchange reported that 2,400 new enrollees had selected plans in the first five days, with 30 percent of them signing up for Washington’s new Cascade Care public option plans. Both states also had thousands of renewals; we’ll know later in the open enrollment window how total enrollment volume is shaping up in comparison with prior years.

Open enrollment continues through December 15 in most states. But in Washington, DC and ten states, the enrollment window has been extended, with deadlines that range from late December to late January.

We have known for months that record-high medical loss ratio rebates would be issued in the fall of 2020. Insurers sent out those rebates in September (some sent them earlier), so individuals and employers who were owed rebates have already received them. But CMS made the official data publicly available late last week. Insurers rebated a total of nearly $2.46 billion this year, which was by far the highest total since the MLR rebate program began.

Healthcare reform under the Biden administration

President-elect Joe Biden will take office in January, inheriting some particularly dire circumstances due to the COVID pandemic. He will also be leading a bitterly divided government where bipartisan solutions have been few and far between in recent years. So what can we expect in terms of healthcare reform in 2021 and beyond?

The Biden/Harris healthcare reform proposal is ambitious, and much of it would require Congressional approval, which is unlikely if Congressional control remains divided. But Georgetown University’s Sabrina Corlette, Kevin Lucia, and JoAnn Volk have laid out a clear explanation of various ways that the Biden administration could take fairly swift action on healthcare reform. This includes measures to improve the country’s response to the COVID pandemic, new administrative rules to reverse the Trump administration’s various measures that undercut the ACA, and additional changes that could further strengthen the ACA’s consumer protections.

And at the state level, Andrew Sprung explains how states could use 1332 waivers to improve health insurance access and affordability, incorporating the assumption that the Biden administration will retighten the 1332 waiver requirements, after they were relaxed by the Trump administration.