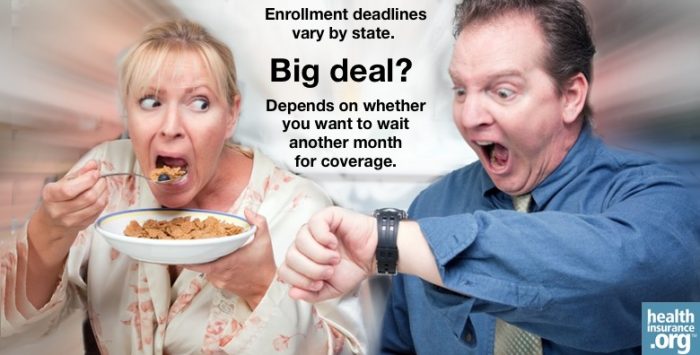 EDITOR’S NOTE: This story has been updated twice since December 15, when a number of state exchanges announced application deadline extensions. The most recent updates are as of December 23.

When I posted my official 2015 Open Enrollment Period Projection of around 12.0 million total QHP enrollments as of February 15th, I also threw in my assumptions for how I expect the flow of those enrollments to go for each month as well. That is, I’m assuming it’ll play out roughly as follows: 7 million by Dec. 15; 8 million by Jan. 15 and 12 million by Feb. 15.

On Tuesday, I even went a little further and figured that the total should hit around 2 million nationally on or around December 8th, followed by a huge spike on/around the 15th caused by not just the scramble to enroll in time for January 1st coverage, but also by the accompanying mountain of expected automatic renewals from people who don’t bother doing anything at all. (This is a bad idea in my opinion for a long list of reasons, but millions of people are likely to do so anyway.)

Projection was based on Dec. 15th deadline

However, there’s an important clarification I should make about that “7 million by 12/15” estimate: At the time, I thought that the Dec. 15 cut-off point for January 1st coverage applied to all of the ACA exchanges this year.

Last year, there was a confusing scramble of ever-changing deadlines due to the nasty technical problems on most of the exchanges. The deadline went from Dec. 15, to Dec. 23, then Dec. 24 (Christmas Eve!); from there, some exchanges stuck with the Dec. 24 cut-off while others pushed it out to Dec. 28 or right up through New Year’s Eve.

If my memory serves me, Cover Oregon even said “screw it” and allowed for retroactive enrollments into the first few days of January 2014 for policies which had “started” several days earlier.

This year, for some reason, I thought that the deadlines were more cut and dry: Enroll by December 15th, make your first payment by whenever your insurance company requires it, and Voila! your policy kicks in on January 1st, 2015.

As it turns out, this is mostly true – or at least it is for now (Who knows if there will be last-minute policy changes two weeks from now?) but not completely.

I was given a heads-up by my contact at the Massachusetts Health Connector who reminded me that a) MA exchange payments are made through the exchange itself, not the insurer; and b) MA’s deadline for selecting a plan and paying the first policy is eight days later, on December 23rd.

OK, Massachusetts is a special case, right? True, but I did some more digging around and it turns out that there are actually five states which have a “plan selection” deadline later than the 15th: Maryland is allowing up until the 18th and Idaho, Massachusetts, Rhode Island and Washington are pushed out to the 23rd.

How much could these four states impact the national total? Well, assuming my 12 million total estimate proves accurate and assuming the state-level breakout is roughly what I’m projecting, MD, ID, MA & WA should make up a total of around 6 percent of the total … which could translate to around 420K or so. In other words, if the actual Dec. 15 tally ends up being around 6.6 million, I’m still probably going to be correct regarding 7 million policies starting on January 1st. 🙂

Also noteworthy is the premium payment deadline. For the most part, this will vary depending on the billing/payment schedule of the insurance company itself, but again, in four states, there’s a hard deadline given.

Massachusetts and Washington State, which are set up to have payments as part of the actual enrollment process, have the same Dec. 23 deadline that they do for plan selection; Colorado has a payment deadline of Christmas Day (Dec. 25), and Idaho, interestingly, has January payment deadlines of either January 10th or 15th (which once again proves my point about not freaking out about “How many have PAID???” until after all the payment deadlines/grace periods have actually passed).

Below I’ve posted a table breaking out the Plan Selection and January Premium Payment deadlines for all 50 states (+DC). (I strongly encourage you to double-check your state exchange to be sure.).