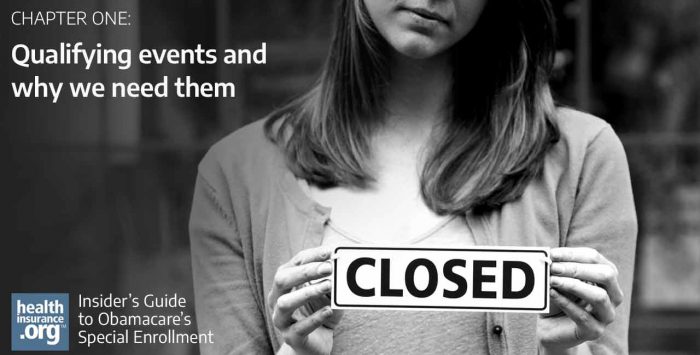 Before the bulk of the Affordable Care Act’s provisions took effect in 2014, health insurance carriers in the individual market accepted applications all year round. But not all of those applications were approved.

That’s all changed now. Applicants can no longer be rejected or charged a higher premium because of pre-existing conditions. Applications don’t even ask questions about medical history anymore, because medical underwriting is no longer used in the individual major medical market. (Note that this is only true because of the ACA; it applies both on- and off-exchange, but it doesn’t apply to plans that aren’t regulated by the ACA, like short-term health insurance plans.)

Why the need for open enrollment

Since coverage is now guaranteed issue regardless of medical history, the trade-off is that enrollment is limited to an annual open enrollment period and special enrollment periods triggered by qualifying events. It’s easy to see why this is necessary: if enrollment were available year-round without any limitations on coverage for pre-existing conditions, adverse selection would be a serious problem.

People would be able to wait to enroll until they were in need of health care, and skip paying premiums the rest of the time. (From 2014 through 2018, the ACA’s penalty for being uninsured applied in situations where people skipped coverage altogether, but the cost of coverage was typically more than the cost of the penalty, and the IRS had few tools available to enforce collection of the penalty. And the federal penalty no longer applies – it was repealed as of January 2019 by the GOP tax bill that was enacted in late 2017; some states have their own individual mandates and penalties for non-compliance.)

In short, it wouldn’t be sustainable to allow year-round enrollment in plans that are guaranteed issue regardless of medical history.

So when the ACA was written, it included a provision to limit enrollment to an annual open enrollment period, similar to the model that was already used for Medicare and employer-sponsored health coverage. The specifics in terms of the dates and length of open enrollment have changed several times over the last few years. For 2022 coverage and future years, HHS implemented an extended enrollment window that continues through January 15 each year, instead of ending in mid-December as it did for several previous years. (Some state-run exchanges have different enrollment windows).

Once open enrollment ends for the year, enrollment is closed in the individual market, on and off the exchange.

That is, unless you have a qualifying event. When the ACA was written, lawmakers understood the importance of limiting enrollment to specific times of the year if coverage was to be guaranteed-issue. But they also understood that some life-changing events warrant the ability to enroll in a new health plan and do not indicate that an applicant is trying to “game the system.”

Life happens. Babies are born, other coverage ends, people move. It wouldn’t make sense to force people to wait until the following January to gain coverage under a new plan following a cross-country move, or to enroll their newborn in a health plan.

The model for qualifying events and special enrollment periods already existed in other markets, including Medicare Advantage, Medicare Part D, and employer-sponsored insurance. If you get your health insurance from your employer, you’re used to the idea that you’ve got an annual enrollment period, and you can only make changes outside of that period if you have extenuating circumstances — a qualifying event.

That was an entirely new concept in the individual health insurance market in 2014, but people have since become used to it. And while enforcement of documentation to prove a qualifying event was relatively lax in the first couple years, HealthCare.gov and most of the state-run exchanges have stepped up their documentation requirements — if you’re enrolling outside of open enrollment, be prepared to provide proof of your qualifying event.

And understand that in most cases, you’ll need to have had minimum essential coverage in place before the qualifying event in order to have a special enrollment period (in other words, several qualifying events just allow for a person to change from one coverage to another, with no more than a short break between plans, as opposed to enrolling in coverage without having had a previous plan in place). There are also limitations in many cases that prevent people from changing to a plan at a different metal level during a special enrollment period.

And if someone in your tax household (ie, the people listed on your tax return) qualifies for a special enrollment period, everyone in the tax household can enroll using that special enrollment period. This was already clarified in previous regulations, but HHS has proposed a technical correction to ensure that the language around this isn’t ambiguous.