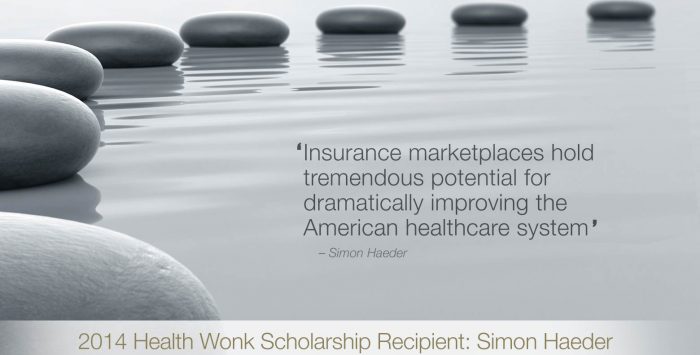 The following guest post is from Simon F. Haeder, a Ph.D. student in Political Science at the University of Wisconsin-Madison and the winner of healthinsurance.org’s first Health Wonk Scholarship.

Haeder’s scholarship essay (below) provides his assessment of the Affordable Care Act’s health insurance marketplaces and the role they will play in the U.S. health care system.

Congratulations to Simon Haeder on his much-deserved scholarship.

The Affordable Care Act (ACA) is a piece of landmark legislation on scale with establishment of Social Security in 1935 and Medicare in 1965. Although the resulting policy changes are far from the cataclysmic proportions alleged by its detractors, the ACA nonetheless significantly transform the American healthcare system in a variety of ways. Unsurprisingly, opposition has been rampant, protracted, and often unwilling to allow for any compromises. Due to the extensive utilization of shared-governance mechanism on part of the ACA, critics have found many venues to impede the implementation of key features of the ACA. This has perhaps been most visible in one of the most crucial components of the ACA, the establishment of health insurance marketplaces (Haeder & Weimer, 2013, 2015). Even after two favorable Supreme Court decisions that could have significantly derailed the impact of the ACA, opposition is unlikely to subside. Although the prospects for successful implementation continue to remain uncertain, these marketplaces offer a potential institutional mechanism for the transformation of employer provided health insurance, and even reforms of Medicaid, the State Children’s Health Insurance Program (S-CHIP) and Medicare.

Health insurance marketplaces seek to facilitate the purchase of insurance by increasing competition, transparency, and efficiency for individuals and (small) businesses. Marketplaces have been established in a variety of forms prior to the ACA including, most prominently, the Massachusetts Health Connector and the Utah Health Exchange, as well as the Wisconsin State Employee Benefits Program, and California’s defunct PacAdvantage (Colliver, 2006). The concept has long been advocated by the conservative Heritage Foundation and it was a mainstay of many Republican health reform proposals until the ACA (“W.Va. seeks to run its own health exchange,” 2011). Marketplaces under the ACA built upon these predecessor but in some respects move well beyond them to include a variety of regulatory functions as well as components to screen applicants for eligibility in public programs and subsidies as well as their enrollment.

The implementation of health insurance marketplaces under the ACA by both state and federal governments has been far from smooth. More than five years after the passage of the ACA many glitches remain to be resolved, ranging from technical issues such as the transmission of enrollment information to insurers or the real-time availability of provider networks, to finding long-term financial stability for the marketplaces themselves (Haeder & Weimer, 2015; Haeder, Weimer, & Mukamel, 2015). Even marketplaces with ample political support like those in Hawaii and Oregon were unable to overcome these challenges and had to revert to a federal solutions after spending hundreds of millions of dollars (McCrimmon, 2015). To a degree, these problems are far from surprising given the remarkable technological and political challenges that implementers were confronted with even under favorable circumstances (Haeder & Weimer, 2013). However, given time and political will, it seems more than likely that marketplaces will function relatively efficiently and glitch-free in the foreseeable future.

Despite these initial shortcoming, insurance marketplaces hold tremendous potential for dramatically improving the American healthcare system. While marketplaces will provide coverage to millions of persons across the nation under the ACA, they should also be considered a stepping stone towards even more challenging issues that go well-beyond the initial target populations of the ACA.

Moving away from employer-based system

First, expanding the utilization of marketplaces to all Americans would allow the nation to move away from current employer-based system with its significant shortcomings (Reinhardt, 2009; Villegas, 2009). While the employer-based approach has been a mainstay of the American health insurance environment since World War II, it harbors significant inefficiencies for both employers and employees. Shifting purchases of insurance into marketplaces would alleviate the burden on employers of seeking out affordable, high-quality coverage for their employees. Instead, employers would provide a set financial contributions to their employees for the purchase of insurance. This would allow employees to become more actively involved in their healthcare decisions and offer them the opportunity to select the most appropriate plan for their families.

True competition based on quality and price

Second, shifting all insurance purchases into insurance marketplaces would allow for true competition among insurers based on quality and price. By requiring that all plans sold in these marketplaces offer a certain minimum of coverage termed Essential Health Benefit, consumers would not only be guaranteed financial protection in case of sickness or injury. Perhaps more importantly, marketplaces would facilitate the comparison of plans because covered services would be similar across plans. Coupled with the provision of healthcare quality data, insurers would be forced to differentiate themselves by offering better services to consumers.

Third, insurance marketplaces offer significant efficiency gains. In addition to the financial benefits for employers and employees described above, shifting all insurance purchases into marketplaces also reduces administrative burdens on insurers, including obtaining enrollment information and plan development. Moreover, combining all risk pools which are currently segregated by firm or individual could help those individuals currently unable to afford coverage obtain access to insurance. By reducing costs, marketplaces may thus help lower the number of individuals who are un- and underinsured and allow them to fully achieve their potential (Daniels, 1985).

Finally, insurance marketplaces may offer a solution to the increasing budgetary pressures of Medicare and Medicaid. Marketplaces make voucher and defined-contribution programs a plausible alternative to contain public expenditures while fostering personal responsibility and consumer choice. Moreover, by mainstreaming poor and near-poor consumers, marketplaces may help alleviate the stigma associated with accepting governmental financial benefits while increasing access to services and providers.

Ultimately, by eliminating market failures such as job-lock, lack of portability, information asymmetry, and adverse selection, which are common to the current system of health insurance provision, marketplaces could provide a viable, transparent, and competitive venue for the purchase of insurance for all Americans. Perhaps most importantly, marketplaces offer a politically feasible solution that could be embraced by both liberals and conservatives.