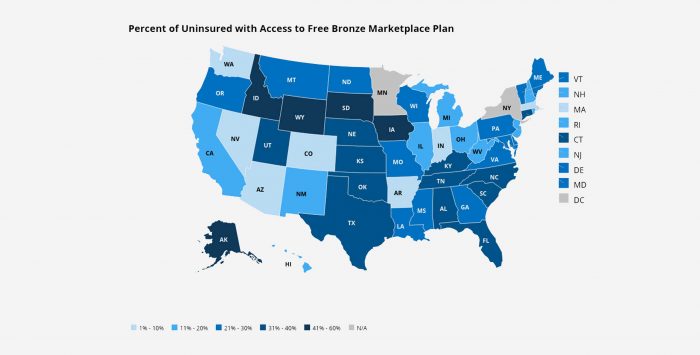 According to a new Kaiser Family Foundation analysis, 4.7 million Americans who are currently uninsured could get free Bronze plans for 2020 (thanks to premium subsidies that are large enough to cover the entire cost of the premiums).

If you buy your own health insurance, the deadline to enroll in a plan for 2020 is quickly approaching. In most states, Sunday is the last day to enroll, although there are a few exceptions where the deadline is later:

According to a new Kaiser Family Foundation analysis, 4.7 million Americans who are currently uninsured could get free Bronze plans for 2020 (thanks to premium subsidies that are large enough to cover the entire cost of the premiums). You can use our subsidy calculator to quickly determine your own subsidy eligibility. You may be surprised at how affordable the coverage is.

Andrew Sprung rightly notes that a significant portion of those 4.7 million people are likely eligible for cost-sharing reductions (CSR) as well. CSR is only useful if you select a Silver plan (which wouldn’t be free). But it would be fairly low-cost thanks to premium subsidies, and the plans would have much lower out-of-pocket costs than the free Bronze options. Sprung also points out that another several million uninsured people are eligible for Medicaid, which is either free or very low-cost.

Virginia has joined a growing list of states putting the brakes on their planned Medicaid work requirements. Medicaid expansion took effect in Virginia in January 2019, and 342,000 people have gained coverage as a result. But the state has also been awaiting federal approval for a Medicaid work requirement proposal that was submitted in the fall of 2018. The proposed work requirement was a key provision in winning enough GOP support for Medicaid expansion to pass in 2018. But Democrats gained a majority in both chambers of the legislature after the state’s recent election, and it was no surprise when Gov. Northam’s administration announced last week that it was officially pausing the work requirement negotiations with the federal government.

Michigan still on track to have Medicaid work requirement in January

The 2020 legislative session starts next month in most states, and several health reform bills have already been pre-filed for consideration during the 2020 session. That includes Medicaid expansion legislation in Kansas, a Virginia bill that would require short-term health plans to cover essential health benefits, and another Virginia bill that would prohibit out-of-network balance billing in emergency situations.

Last week, Charles Gaba wrote a fascinating (and frustrating) account of how an exchange-certified brokerage in California is selling healthcare sharing ministry plans from Aliera Healthcare, and calling them “short-term health plans,” despite the fact that California no longer allows short-term health insurance to be sold in the state. (The agency is calling them “plans” instead of “insurance.”) Over the last several months, regulators in several states have taken action against Aliera Healthcare and Trinity Healthshare. (As Colorado regulators note here, the two entities work in tandem to enroll people in health care sharing ministry plans).

Earlier this year, Indiana enacted a new law that allows short-term health plans to follow federal duration limits. (The state had previously capped these plans at six months and prohibited renewals.) But the state’s law also requires short-term plans to have benefit caps of at least $2 million. And now the Indiana lawmaker who sponsored the state’s legislation is sponsoring a similar model act that could be used as a template in other states.