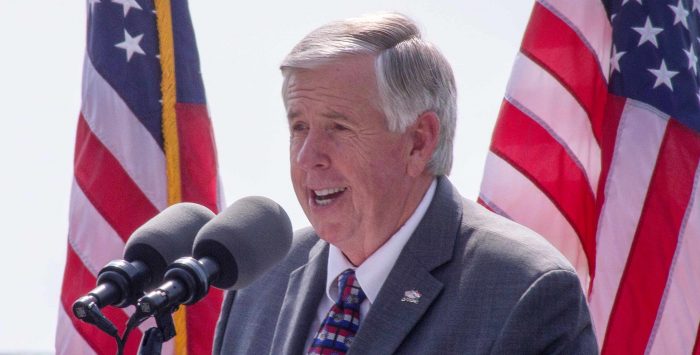 Missouri Gov. Mike Parson is opposed to Medicaid expansion but says he'll “uphold the will of the people” if the measure ends up on the ballot and voters approve it. Photo credit: Philip Rozenski/Shutterstock

End of open enrollment days away in most states

Open enrollment for individual-market health insurance, which began November 1, will conclude in less than two weeks (December 15) in states that use HealthCare.gov. The other 12 states and DC have varying enrollment deadlines that range from December 15 to as late as January 31.

In the 38 states that use HealthCare.gov, nearly 2.9 million people selected on-exchange health plans for 2020 in the first five weeks of open enrollment. That included nearly 765,000 new enrollees and about 2.1 million who renewed their existing coverage. Twelve states and the District of Columbia run their own exchanges, and their enrollment updates are more sporadic. Six of them have thus far reported a combined enrollment total of about 755,000 people, but more than half of them have not yet issued any official enrollment numbers, including highly populated states like California and New York.

The Florida Health Insurance Advisory Board approved nearly all of their legislative recommendations during a meeting December 3, and will send the recommendations to legislative leadership for consideration during the 2020 session. Among the recommendations is a proposal to include emergency transportation in the state’s already robust surprise balance billing protections, and a proposal to codify various Affordable Care Act (ACA) consumer protections into state law. The Board is also recommending a legislative change that would specifically allow small groups to offer coverage to employees and their dependents, but not spouses, in order to help spouses avoid the ACA’s family glitch. But as we’ve explained, that doesn’t always help under the current subsidy calculation rules.

Nearly all student health plans are required to be compliant with the ACA’s individual market regulations. (The exception is student health insurance issued by schools that self-insure their coverage.) But between 2014 and 2016, students at ten colleges in Vermont were enrolled in student health plans that didn’t meet state and federal regulations; Companion Life had marketed the plans to the schools without obtaining proper approval from the state. The Vermont Department of Financial Regulation has announced a $1.8 million settlement with Companion Life, including a penalty of $950,000 (the largest the state has ever imposed on an insurer) and nearly half a million dollars in restitution for at least 212 students whose claims were improperly denied. According to the settlement, Companion Life is not currently offering student health plans to schools in Vermont.

For nearly three decades, New Mexico lawmakers and healthcare advocates have been considering a Health Security Plan, which would provide nearly universal coverage in New Mexico. Legislation to create the health security plan (HB295 and SB279) did not pass in 2019. But lawmakers did pass HM92, which directs the legislative finance committee to conduct a fiscal analysis of a health security plan, with findings to be reported to the legislature by July 2021. A consulting contract has been awarded to three entities (KNG Health Consulting, IHS Markit, and Lee Reynis, a researcher based in Albuquerque) who are tasked with conducting the fiscal analysis. A public meeting about the fiscal analysis is taking place in Albuquerque on December 4.