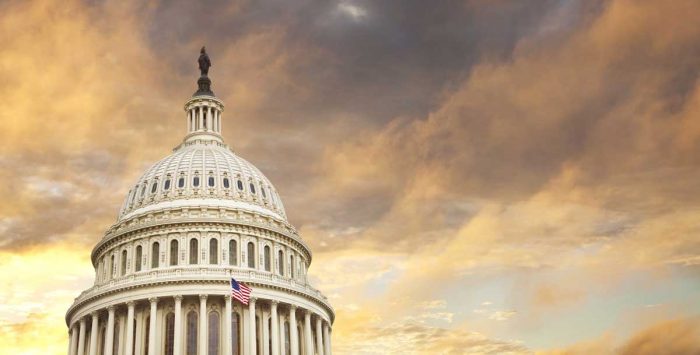 A 50-50 split in the U.S. Senate – created by apparent Democrat wins in Georgia Senate races this week – could open the door to various federal health policy reforms in a Democrat-controlled Congress. | Image: Daniel Thornberg / stock.adobe.com

The biggest health policy news this week is the apparent victory of both Rev. Raphael Warnock and Jon Ossoff in Georgia’s runoff Senate races. A expected victory by both Democrats would bring the Senate to a 50-50 split, with Vice President-elect Kamala Harris casting tie-breaking votes as necessary. There is a wide range of administrative health policy actions that the Biden administration will be able to implement without involving Congress, but the shift in power in the Senate opens the door for a variety of changes that require legislation but that can be accomplished with just 51 votes in the Senate – including making the California v. Texas lawsuit moot before the Supreme Court issues its ruling later this year.

Maryland was one of just two state-run exchanges that opted to not extend open enrollment for 2021 coverage. But Maryland announced this week a new COVID-related special enrollment period for uninsured residents, which will continue through March 15. Maryland previously offered one of the nation’s longest COVID-related special enrollment periods, which began last March and continued through December 15, 2020. The new special enrollment period offers the same generous effective date rules that the state was using in 2020, allowing uninsured residents to sign up for coverage with an effective date that’s either retroactive or no more than two weeks after the date they enroll. Uninsured Maryland residents who enroll by January 15 will have coverage backdated to January 1.

Open enrollment for individual/family health plans is still ongoing in ten states and DC. But it ends next Friday, January 15, in five of those states:

Residents in those states can still enroll in a plan with a February 1 effective date. But after January 15, a qualifying event will be necessary in order to enroll.

New York’s legislature considered similar legislation in 2016 after New York’s health insurance CO-OP failed (and again in each of the subsequent legislative sessions). But it was opposed by both Gov. Cuomo and the state’s health insurers, who objected to the assessment that would have been charged to fund the program. The current bill has 35 sponsors in New York’s Assembly, all of whom are Democrats.

Legislation (SB2073) has been introduced in North Dakota, at the request of Insurance Commissioner Jon Godfread, that would allow for short-term health insurance plans with longer durations but also stronger consumer protections. Under North Dakota’s current rules, short-term health insurance plans can have terms of no more than 185 days. One renewal is permitted, but the total duration of these plans cannot exceed one year, including the renewal period.

The newly introduced legislation calls for the state to allow association short-term limited duration health plans to follow current federal rules, which means they could have total durations of up to 36 months. But while federal rules allow short-term plans to be renewable (for up to 36 months in total), North Dakota’s SB2073 would require association short-term plans to be renewable at the option of the insured.

Three years ago, Amazon, Berkshire Hathaway, and JPMorgan Chase & Co. announced a new partnership to “address healthcare for their U.S. employees, with the aim of improving employee satisfaction and reducing costs.” Their new joint venture, named Haven, was an independent entity, “free from profit-making incentives and constraints,” which set out to shake up the conventional health insurance model and provide “simplified, high-quality and transparent healthcare at a reasonable cost.”

But as David Anderson noted at the time, this was never going to be an easy road. And Haven announced this week that it will no longer exist as an independent entity as of the end of February. Amazon, Berkshire Hathaway, and JPMorgan Chase & Co. plan to “continue to collaborate informally” as they work on health care solutions for their own employees, but they’re winding down their joint venture.

More than a year ago, the Trump administration issued a proclamation that requires immigrants to have health insurance – or proof that they would have coverage within 30 days of entering the country – in order to obtain a visa. The rule was blocked by a judge before it could take effect, but a three-judge panel for the U.S. Court of Appeals for the Ninth Circuit overturned that injunction last week in a 2-1 ruling.  The court’s ruling does not take effect immediately, however, and the Biden administration is expected to overturn the rule soon after taking office, making it unlikely that the health insurance requirements for immigrants will be implemented.

Last week, the California Department of Insurance notified health insurers in the state that they cannot deny coverage solely based on age when an insured is undergoing a gender-affirming female-to-male transition and seeking male chest reconstruction surgery. The Department was made aware of several insurers that had denied these claims solely due to the patient being under the age of 18, and took action to address the issue. The state’s letter to insurers clarifies that mastectomy and male chest reconstruction can be carried out while the person is still a minor, and that any claims decisions should be made on a case-by-case basis and cannot discriminate based on age.