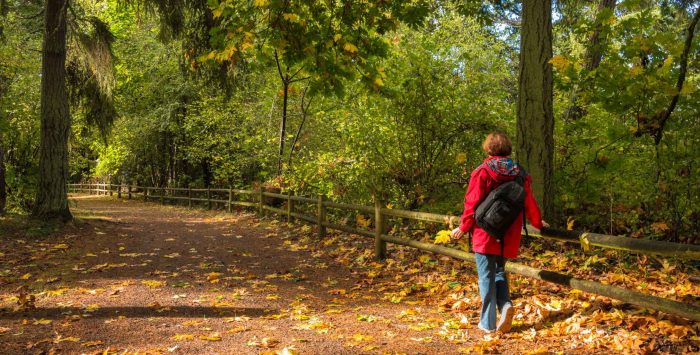 How high is Medicare enrollment in Washington?

Most Americans become eligible for Medicare when they turn 65. But Medicare eligibility is also triggered for younger people if they’re disabled and have been receiving disability benefits for 24 months, or have ALS or end-stage renal disease. Nationwide, more than 12% of Medicare beneficiaries are under the age of 65. In Washington, about 11% of Medicare beneficiaries are eligible due to disability rather than age, and are under the age of 65.

Original Medicare coverage is provided directly by the federal government, and enrollees have access to a nationwide network of providers. But people with Original Medicare need supplemental coverage (from an employer-sponsored plan, Medicaid, or privately purchased plans) for prescription drug coverage and to reduce and cap their exposure to out-of-pocket costs (deductibles and coinsurance), which are not capped under Original Medicare).

Medicare Advantage includes all of the benefits of Original Medicare, and the plans usually also have additional benefits and programs, such as integrated Part D prescription drug coverage, dental and vision coverage, and extras like nurse hotlines and gym memberships. But Medicare Advantage insurers establish their own provider networks and service areas, which are generally localized and more limited than the nationwide network for Original Medicare.

Out-of-pocket costs for Medicare Advantage are often higher than they would be if a beneficiary had Original Medicare plus a Medigap plan. There are pros and cons to either alternative, and no single solution that works for everyone.

Between late 2019 and early 2022, UnitedHealth Group saw a 33.4% increase in Medicare Advantage enrollment in Washington. With 210,064 Washington residents enrolled in its MA plans in February 2022, the carrier had the highest market share – 35% – out of a field of 16 carriers selling MA plans. 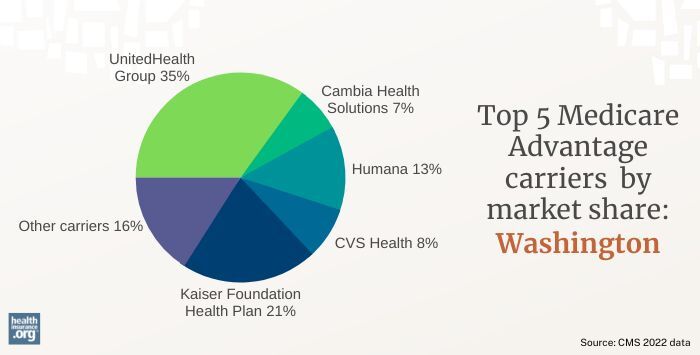 Original Medicare does not limit out-of-pocket costs (ie, the deductibles and coinsurance that Medicare beneficiaries have to pay for hospital and outpatient care), so most enrollees maintain some form of supplemental coverage. More than half of Original Medicare beneficiaries get their supplemental coverage through an employer-sponsored plan or Medicaid. But for those who don’t, Medigap plans (also known as Medicare supplement plans) will pay some or all of the out-of-pocket costs they would otherwise have to pay if they had only Original Medicare (Medigap plans cannot be used with Medicare Advantage coverage). A

According to an AHIP analysis, there were 310,735 Washington residents with Medigap coverage as of 2020.

There are 23 insurers that offer Medigap plans in Washington as of 2022, although some of them have a service area that does not include the whole state. Medigap plans are sold by private insurance companies, but the plans are standardized under federal rules. There are ten different plan designs (differentiated by letters, A through N), and the benefits offered by a particular plan (Plan A, Plan F, etc.) are the same regardless of which insurer sells the plan. Pricing, however, varies from one insurer to another.

But Washington is one of eight states where Medigap insurers are required to use community rating for enrollees age 65 and older (see Washington statute RCW 48.66.045).

In addition to community-rating requirements, Washington state law also gives Medigap enrollees the option to switch to a different Medigap plan at any time, guaranteed-issue. Federal rules only grant a one-time six-month open enrollment period for Medigap, beginning when the enrollee first files for Medicare benefits; after that, unless a person experiences one of the limited circumstances that trigger a guaranteed-issue right, Medigap plans can be medically underwritten, unless states impose other rules. Washington is one of just a handful of states where state law prevents Medigap insurers from using medical underwriting if a person with Medigap wants to switch to a different policy after their initial enrollment window has ended. State law in Washington allows a person with Medigap Plan A to switch to any other Medigap Plan A. And a person with Medigap Plan B through N can switch to any other Plan B through N. This opportunity to switch plans on a guaranteed-issue basis applies year-round, as long as the person has been covered under a Medigap plan for at least 90 days.

People who aren’t yet 65 can enroll in Medicare if they’re disabled and have been receiving disability benefits for at least two years (people with ALS or end-stage renal disease do not have to wait 24 months for Medicare eligibility), and 11% of Washington Medicare beneficiaries are under age 65. But federal rules do not guarantee access to Medigap plans for people who are under 65. The majority of the states have implemented rules to ensure that disabled Medicare beneficiaries have at least some access to Medigap plans. But although Washington has gone beyond federal regulations in terms of rating requirements and allowing Medigap enrollees to switch plans on a guaranteed-issue basis, the state does not require Medigap insurers to offer coverage to people under the age of 65 who are enrolled in Medicare due to a disability.

For people under 65, United American offers only a Medigap Plan B. The premium in 2022 was $459/month, versus the $244/month that United American charges for Plan B if the enrollee is 65 or older. The Washington State Health Care Authority plan is administered by Premera Blue Cross, and Plan G is available to enrollees under age 65. For retired state employees, the rates are lower, but the plan is available for any Washington resident under age 65 who is eligible for Medicare due to disability. In 2022, the price was $321 for a person under 65 who isn’t a retired state employee, versus $189/month if the person is 65.

But Washington has also maintained their pre-ACA high-risk pool (WSHIP, the Washington State Health Insurance Pool), and it serves as an option for disabled Medicare beneficiaries (WSHIP’s non-Medicare plans have been closed to new enrollees since 2014, as the ACA eliminated the need for a high-risk pool in the non-Medicare market). WSHIP’s Medical Supplement Plan is available to people who are unable to obtain Medigap plans due to medical underwriting, and who live in an area where they don’t have “a reasonable choice of Medicare Advantage plans,” or who have end-stage renal disease (since Medicare Advantage plans can decline applicants with ESRD; this will no longer be the case as of 2021, however).

WSHIP’s Medicare supplement plan is $407/month in 2022 for beneficiaries under 65, and $324 for those age 65+ (a person who missed their initial enrollment period for Medigap and tried to enroll at a later time, without a guaranteed-issue right, could be declined by the insurer; WSHIP then becomes an option).

Several other states — Alaska, Iowa, Nebraska, New Mexico, North Dakota, South Carolina, and Wyoming — have also maintained their high-risk pools and use them to provide supplemental coverage to Medicare beneficiaries who are unable to obtain private Medigap coverage.

Disabled Medicare beneficiaries have access to the normal Medigap open enrollment period when they turn 65. At that point, they can select from among any of the available Medigap plans, at the standard community-rated premiums that apply to people who are 65 or older.

There were 23 stand-alone Part D plans for sale in Washington in 2020, with monthly premiums that ranged from about $8 to $115 per month.

Medicare Part D enrollment is available during the annual election period each fall, from October 15 to December 7. Plans selected during this window take effect January 1 of the coming year. If you change your mind more than once during the open enrollment period, the last Part D plan you select will be the one that takes effect.

How does Medicaid provide financial assistance to Medicare beneficiaries in Washington?

Our guide to financial assistance for Medicare enrollees in Washington includes overviews of these benefits, including Medicare Savings Programs, long-term care coverage, and eligibility guidelines for assistance.

Medicare in Washington: Resources and assistance for Medicare beneficiaries and their caregivers

The Medicare Rights Center offers a comprehensive national website and a helpful call center that can provide a variety of assistance with Medicare-related questions.

The Washington Office of the Insurance Commissioner regulates Medigap plans and also licenses and regulates the brokers and agents who help residents in the state secure various forms of private Medicare coverage (Part D, Medicare Advantage, and Medigap plans). The Washington Office of the Insurance Commissioner maintains an extensive collection of resources for Medicare beneficiaries in the state, as well as a page about how consumers can identify and report Medicare fraud and abuse.