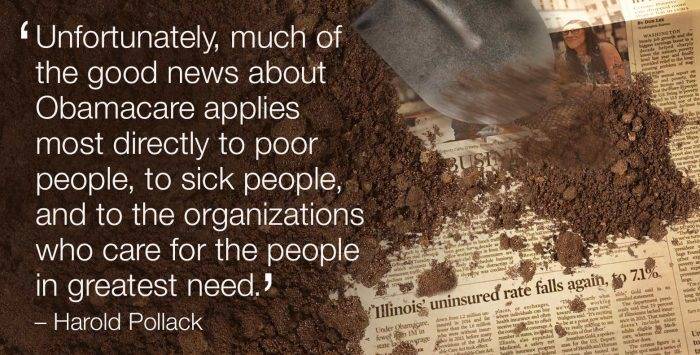 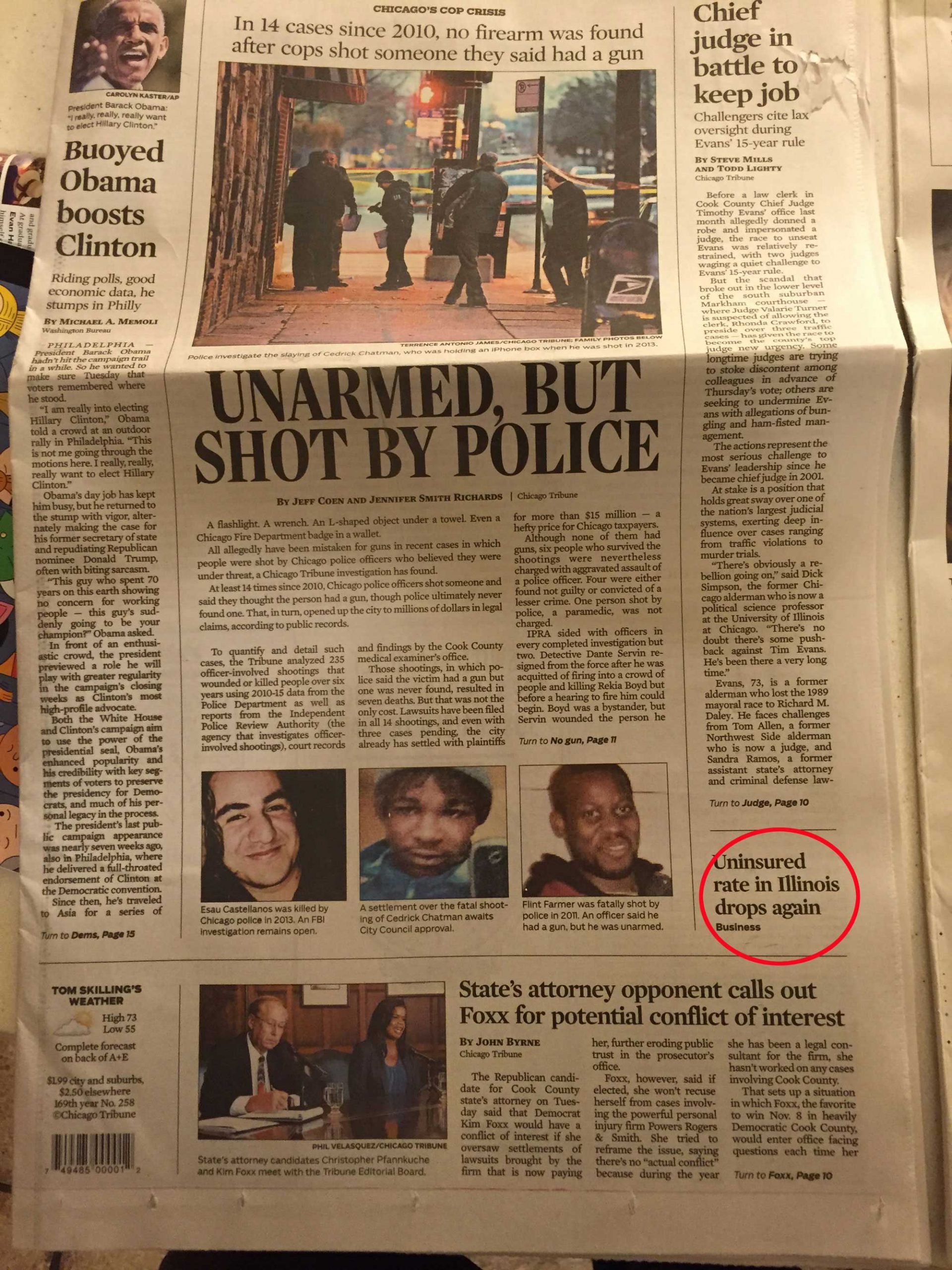 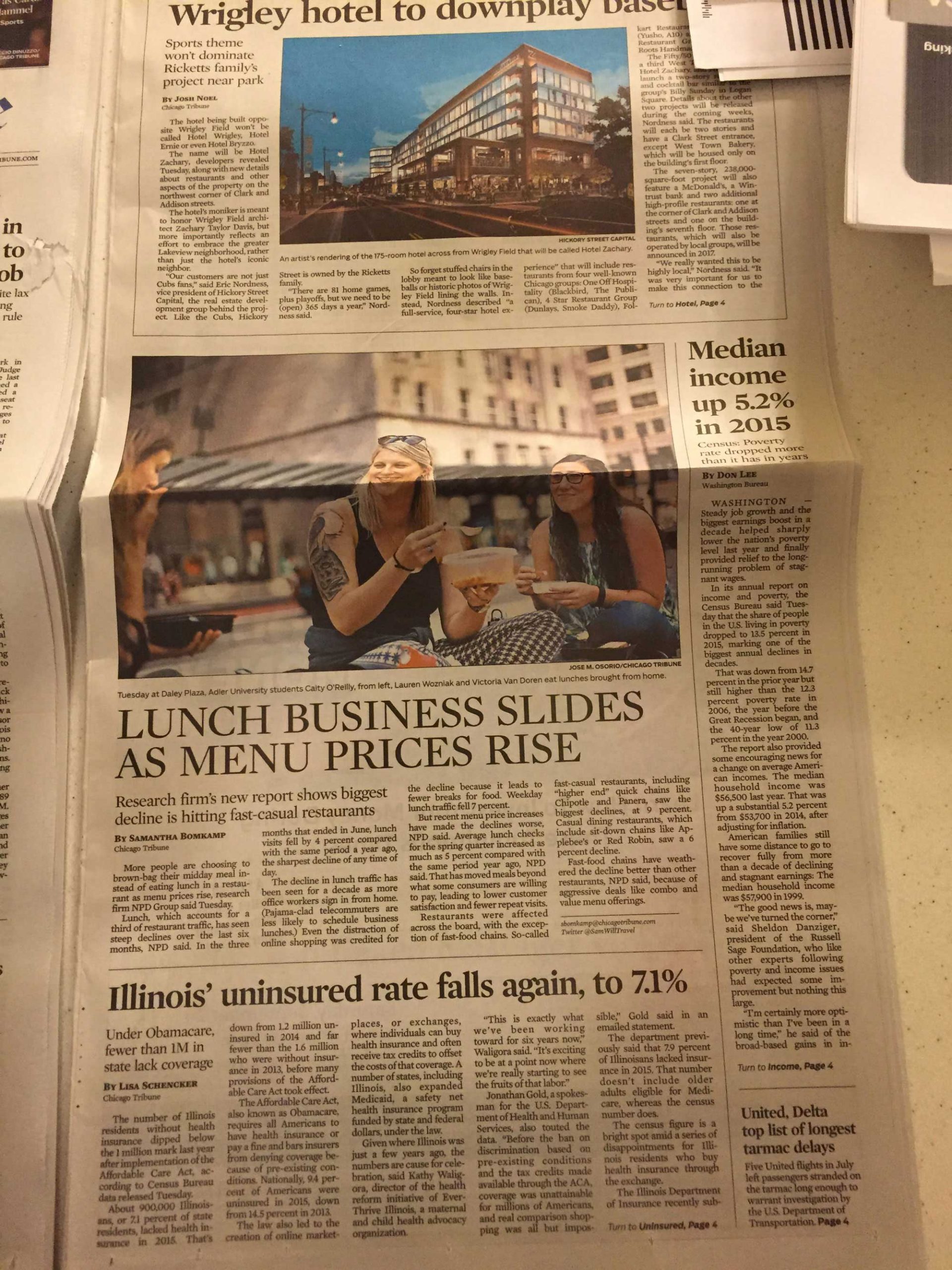 Before you (left image) is the front page of my morning paper, the Chicago Tribune. Note the little item on the lower-right, below the fold. If you follow that to the business page, it leads you to a below-the-fold story shown in the picture at the right.

Too bad the news that 700,000 people got health insurance happened to hit on a day where a more important economic story broke: “Wrigley hotel to downplay baseball.” That story got its own box and everything, with an artist’s color rendering of the snazzy proposed 175-room hotel.

The insurance story itself is nicely written. Reporter Lisa Schencker explains that the number of uninsured Illinois residents dropped from 1.6 million in 2013 to about 900,000 by 2015. Under the follow-up headline “higher rates, fewer choices likely,” the story outlines many of the real difficulties experienced by the Illinois marketplace.

Good news is no news?

Of course ACA is imperfect. Our Illinois marketplace is more imperfect than most, featuring many glitches and challenges – some worsened by congressional efforts to undermine health reform by cutting expected payments to insurance plans. But for all its limitations, ACA is the best thing we’ve done in decades for poor people, for sick people, and for people with pre-existing health conditions.

Schencker’s story also notes – way down in paragraph 23 – that “most Illinoisans who buy insurance on the exchange will spend less than $75 a month for coverage after tax credits.” That is a godsend to hundreds of thousands of people.

ACA’s Medicaid expansion is almost entirely funded by the federal government. Non-expansion states have literally turned down free money to avoid providing health coverage to their poorest citizens. About 90 percent of the individuals shut out are in conservative southern states. I’ll let readers draw their own conclusions about that.

This is critically important for millions of people who obtained needed coverage. It’s also critically important to hospitals and other safety net providers. Providers located in expansion states have seen sharp declines in uncompensated care costs. Providers located in non-expansion states have seen a much smaller decline, and thus are much more likely to experience financial shortfalls.

ACA turned out be especially important for another reason here in Illinois. We are experiencing a political and fiscal crisis. Partisan gridlock in Springfield has prevented us from even passing a state budget. So Medicaid is the only thing keeping drug treatment, mental health care, and other crucial services afloat.

Unfortunately, much of the good news applies most directly to poor people, to sick people, and to the organizations who care for the people in greatest need. These are not a key constituency in state politics. They are not undecided voters in this year’s presidential campaign. They are not a core market segment for the morning newspaper, either. Their good fortune is duly noted, but decidedly below the fold.