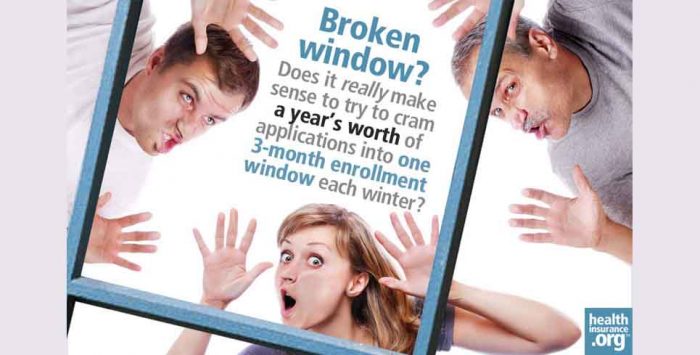 But this is also the time to regroup and determine what changes can be made to improve enrollment in the coming years and move us closer to the goal of insuring every American.

We could start big, by looking at whether or not we really need the exchanges in order to continue to implement the important aspects of health care reform. But if we’re not up for a major overhaul, there are plenty of improvements to the system that can be made within the existing framework, and without requiring any acts of Congress or major upheaval.

On April 1, Families USA released a list of ten such changes that would improve the open enrollment process going forward. Two of my favorites include adjusting open enrollment to better line up with the tax filing season and using existing data to find people who are eligible for expanded Medicaid, and .

Although many states have embraced Medicaid expansion, they can increase enrollment rates by using data already in state systems for programs like SNAP, WIC, etc. This type of system has been working extremely well in a few states, including Oregon and West Virginia.

Mostly because of their targeted Medicaid enrollment, West Virginia reduced its uninsured rate from 13.5 percent to 4.2 percent in just four and a half months (and by late March, had enrolled an astonishing 73 percent of the people who were newly eligible for Medicaid under the expanded guidelines).

Everything about this approach makes sense: It’s fast and efficient and relies mainly on computerized systems as opposed to waiting for eligible individuals and families to self-identify and submit an application for coverage. Medicaid enrollment goes year-round, so states can begin using “fast-track” enrollment right away.

Another Families USA recommendation is to better align future open enrollments with the tax filing season. Here’s the conundrum:

Some people aren’t yet aware that they’re going to have to pay a tax penalty in 2015 for not having health insurance this year. Or if they are, they aren’t aware of how much the penalty will be (for most households, it’s a lot more than $95). Open enrollment for 2015 runs from November 15, 2014 until February 15, 2015.

Some people have their taxes filed by February 15, but most Americans wait until after that date. So there will be people who file their taxes after February 15 next year (after the 2015 open enrollment window has closed), and find out that they owe a penalty for not having had health insurance in 2014.

Unfortunately, by then it will be too late for them to get coverage for 2015, and they will ultimately be on the hook for yet another penalty when they file their taxes in 2016. (And the penalty is much more significant for those who remain uninsured in 2015; it rises to $325 per person or 2 percent of income, whichever is greater).

Families USA is recommending a special open enrollment period next year for people who file their taxes after February 15 and find out that they owe a penalty. They would then have an opportunity to enroll in a plan for 2015, avoiding a much larger penalty when they file taxes the following year.

And the organization would like to see general open enrollment more closely aligned with the tax filing season in future years, so that the tax implications of the ACA are being understood during a time when people are free to make changes to their coverage or enroll in a new plan.

I like the concept of a special open enrollment window for people who find out they owe a penalty after the general open enrollment ends, but perhaps we need to reconsider the premise that open enrollment should be simultaneous for everyone in the individual market. It might make more sense to spread open enrollment out across the whole year, based on birthdays or some other easily identifiable metric.

During this first open enrollment, we saw numerous examples of exchanges and carriers struggling to keep up with enrollment volume. And it’s not surprising to hear about staffing cuts at the end of open enrollment, with plans to rehire people in November when open enrollment begins again. That might be a business model that makes sense in malls at Christmas time, but health insurance is more complicated than holiday shopping. We need well-trained, permanent staff who are confident in their job security and committed to providing high-quality customer service.

Applicants do not want to wait on hold for 45 minutes to talk with their carrier or the exchange. They do not want to deal with endless phone trees or “triage” systems in call centers. But when we condense everyone’s enrollment into a few months, there tends to be a bottleneck.

Spreading out open enrollment would allow carriers and exchanges to maintain level staffing throughout the year, and would result in better customer service with faster processing of applications and policy changes. Obviously it would require a significant public education campaign, and coordinated efforts on the part of carriers to let insureds know about upcoming open enrollment windows.

But we need to do that regardless of how open enrollment is structured: A survey by the Kaiser Family Foundation in mid-March found that only 39 percent of uninsured Americans knew that open enrollment was ending on March 31, so even the current model still needs plenty of public education.

Now that individual health insurance is guaranteed issue, it’s essential that we have limited enrollment windows, the same as employer-sponsored plans. Otherwise there would be too much incentive for people to wait until they needed care to enroll in coverage. But that doesn’t mean we have to follow a model that requires everyone to go through open enrollment at the same time.

If you’re curious about what can be learned from the first open enrollment and used to make future enrollments better, I encourage you to read the full list of recommendations from Families USA. And if you have ideas of your own, be sure to share them with your state’s exchange or HHS. November 15 will be here before we know it!