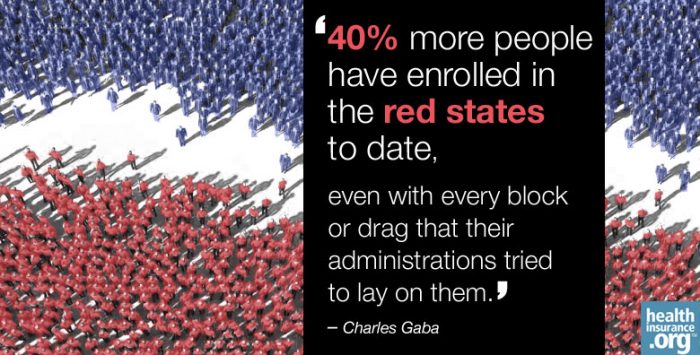 As we head into the final week of 2015 open enrollment (assuming no surprise extension period, of course), there are some clear enrollment trends developing … and they’re separated distinctly by results in blue and red states. And sure, anyone might have predicted a division in outcomes, but what I’m finding is essentially the opposite of what most folks might expect.

Here’s what’s interesting: Since the beginning of the debate about exchange implementation, Republican governors and state legislators have fought like hell to have nothing to do with Obamacare. They refused to set up their own exchanges, they refused to expand Medicaid, they threw absurdly restrictive regulations in the way of navigators trying to help their own citizens acquire decent healthcare coverage.

But in the end, not only has Medicaid expansion started to spread across the GOP landscape, as it turns out, red state numbers are actually outpacing Democratic state private enrollments by a wide margin!

The single most dramatic example? Florida. It’s hard to imagine a more unfriendly environment for Obamacare.

Florida’s ultra-conservative governor and state legislature have been extremely hostile towards the Affordable Care Act: No Medicaid expansion. No state-based exchange. GOP Senator Marco Rubio even spearheaded the creation of Florida’s own “anti-Obamacare” healthcare “exchange” (which has proven to be a colossal failure).

On top of everything else, Florida had the highest number of residents with legal residence/citizenship issues last year. (In the end, 112,000 people were given the boot nationally at the end of September for this reason).

And yet, somehow, as of February 6th, Florida was outpacing every other state in the country with 1.39 million enrollees … even bypassing California, which was last year’s winner and with nearly twice the population. I’ve even increased my target for Florida from 1.5 million to 1.6 million (although I’m keeping my original targets on the spreadsheet officially). It’s even conceivable that Florida will end up reaching over 1.7 million QHP enrollments this year, while California may come in slightly short of that.

But Florida’s not the only Red-state surprise.

That’s not a typo. Forty percent more red-state residents have enrolled in QHPs to date … and here’s why.

Republican-leaning states tend to have higher ratios of low-income residents than Democratic-leaning states, as well as higher percentages of uninsured residents in general. That means a higher percentage who are likely to be eligible for subsidized healthcare policies … which in turn means a higher ratio likely to buy via the ACA exchange. (The irony is not lost on me here.)

One caveat: the definition of a given state being classified as “red” or “blue” can be somewhat subjective, of course. My home state of Michigan has voted for Democratic Presidents and Senators for decades, and our previous two-term governor was a Democrat as well … but since 2010, the GOP has had a death grip on every state-level office due to massive gerrymandering, among other reasons.

Other “swing states” have a similar situation. I used this overview from Wikipedia to nudge every state into one category or the other, and came up with the following:

Yes, that’s right: If you split the country between blue/lean-blue and red/lean-red states, the total population is virtually 50/50 … but again: 40 percent more people have enrolled in the red states to date, even with every block or drag that their administrations tried to lay on them.

3. Even Medicaid expansion will not be denied

Medicaid is, by definition, the very essence of Socialized Medicine, the scourge of Republicans: Taxes from people who can afford health coverage go directly to pay nearly 100 percent of the healthcare costs of poor people who can’t. It’s no wonder GOP politicians shot it down as soon as the Supreme Court told them they could.

And yet, as of this writing, of the 28 states (if you include DC) that have expanded Medicaid under ACA provisions, using my categorization above, six of them (Arizona, Arkansas, Iowa, North Dakota, Ohio and West Virginia) are Republican-leaning. Michigan and Pennsylvania … which I listed as “blue” via judgment call … put through expansion as well, even if the GOP legislature delayed it by three months and a full year respectively.

Alaska, Idaho, Montana, Utah and yes, even Texas, are considering caving on Medicaid expansion as well (albeit likely with more conservative-friendly provisions such as work requirements and co-pays). Tennessee and Wyoming even considered putting through Medicaid expansion programs, although both were Koch-blocked earlier this week.

Hell, according to the latest CMS report, Medicaid/CHIP enrollment has still gone up an impressive 7 percent (over 1.4 million people) over the past year … even in the 22 states which haven’t expanded Medicaid. (Of course, it’s increased 25.5 percent in those which did expand.) And remember, “traditional” Medicaid in many of those states is extremely restrictive.

The great irony, of course, is that if the Supreme Court does end up pulling the plug on federal tax subsidies for those who enroll via HealthCare.gov, it’s the GOP states which will lose out on billions of dollars being returned to their economies, but a chunk of their taxes will still be going to pay for those subsidies in the Dem states.

Ezra Klein over at Vox.com put it more clearly a week or so ago: In general, the red states are deliberately trying to cut off their noses to spite President Obama…but the people who live there have clearly made up their minds:

When it comes to Obamacare, red-state politicians may hate Obama, but their residents desperately want the Care.