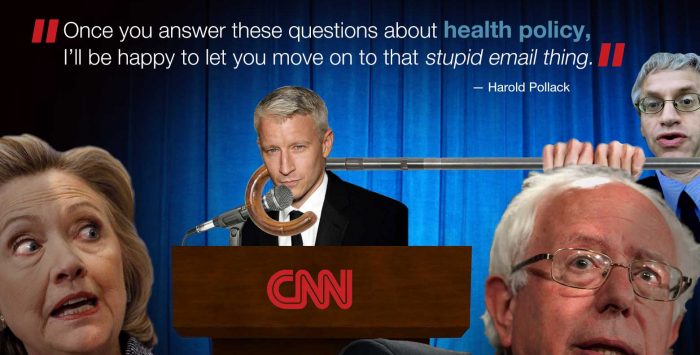 For months, we’ve been watching Republican presidential contenders trying to outdo each other in lambasting the alleged sins of Planned Parenthood and assorted undocumented immigrants, not to mention the dreaded Obamacare.

Tonight, the Democrats – Hillary Clinton, Bernie Sanders, Martin O’Malley, Jim Webb and Lincoln Chafee – will finally have their own debate. I trust the contenders will be more reality-based than their Republican counterparts. I certainly hope so.

I’m sure they have all sorts of issues they want to discuss: the mess in Syria, the latest Wall Street chicanery, Donald Trump’s historical analysis of ethnicity and gender in American life, Benghazi and the Hillary email thing.

They’ll have time enough for these questions another time. But first, in my role as self-appointed moderator of tonight’s debate, I and a few colleagues have some questions about my own obsession: The post-Obama future of health reform.

1. How would you improve Obamacare?

To everyone: This is my pompous talking-head preamble. The Affordable Care Act is the law of the land. In many ways, it has been a triumph, insuring millions of people, improving safety and quality, costing less than the experts predicted. Whatever Republican candidates say about “repeal and replace,” the new law isn’t going away. Yet it has its problems. So what do you see as the ACA’s greatest flaw, and how would you fix it?

Guest-questioner Henry Aaron, Bruce and Virginia MacLaury Senior Fellow at the Brookings Institution has a question for Elizabeth Warren. (She is the apparition to Secretary Clinton’s left.): This year marks the 50th anniversary of Medicare. It is perhaps the most popular single program administered by the federal government. Yet many on both the political left and right believe the time is right for some improvements. What is on your list?

A question from another guest panelist, my mom, who is a single-payer supporter in Medicare: Many Americans are frustrated by high prescription drug costs, and are aware that citizens of other countries are paying far less for the same medications. Some have called for allowing Medicare to negotiate for drug prices. The pharmaceutical industry has argued that would hamper innovation.

Others propose insurance regulations that would cap prescription drug costs, but this solution is criticized as being too “downstream,” and may simply spread the same high costs around to everyone, leading to a rise in premiums. Describe how you would address this problem.

4. How would you improve mental health care?

A question from some guy on the train: ACA included mental and behavioral health provisions that deserve greater attention. There are important pieces of mental health legislation in Congress such as the Murphy bill. We are also facing a crisis with regard to substance abuse, with heroin overdoses at record levels. As president, what approach would you take to improve mental health and substance abuse treatment?

5. How will you help poor people and seniors get dental care?

Another guest panelist, Adele Stan, columnist at the American Prospect, asks: “Can we please have some discussion about including dental care as part of all medical plans? I mean, why is the health of one’s mouth – which affects every other part of the body – in a separate category from all other medicine? It makes no damn sense.”

I’ll put this question to Senator Sanders, because he actually proposed a bill to expand dental coverage that everyone ignored before he ran for president. About 85 million Americans lack dental coverage. Oral health problems are leading causes of school absence, missed workdays, and emergency department use.

So, Senator: The Affordable Care Act did little to expand adults’ access to dental services. Medicare and Medicaid don’t do much, either. How would you address this problem?

6. Medicaid underpays primary care doctors and specialists. What will you do about that?

To the absent Joe Biden, at Elijah’s lectern*. In many states, Medicaid pays so little that patients have trouble finding doctors. Blue states such as New York and California rank among the worst offenders. Their Medicaid programs pay primary doctors about half of what Medicare does, with predictable results. How will you address this problem?

7. How would you deal with Republicans in DC?

To Governor O’Malley: When you are elected president, the Messiah will presumably have come. Yet Republicans will still control the House and probably the Senate. How would you deal with them regarding the Affordable Care Act? Are there items you would be willing to negotiate? Would you do anything different from what President Obama has done?

8. How would you deal with red-state Republicans on Medicaid?

To Lincoln Chafee: We might have saved a lot of time if we had enacted your dad’s health plan 20 years ago. But I digress. ACA envisioned that every state would provide Medicaid to uninsured people with incomes below the federal poverty line. The Supreme Court had other ideas. Its 2012 NFIB decision permitted states to opt out of ACA’s Medicaid expansion. Twenty-one states have done exactly that, locking out almost 4 million poor adults from insurance coverage, most in formerly segregated southern states.

President Obama made many concessions to governors who were willing to expand Medicaid. As his flexibility became apparent, Republican governors demanded more. Some want to charge monthly premiums, impose mandatory wellness programs or Medicaid work requirements. Others want to charge co-payments for name-brand medicines and emergency department use.

What are your own red lines as you negotiate these measures? Are there areas where you see room for reasonable compromise?

9. Why are all these health economists wrong to support the Cadillac tax on high-end insurance plans?

Bonus question: If you do repeal this tax, how would you recoup the estimated $91 billion the Cadillac tax is predicted to raise over the next decade?

10. How would you improve the consumer experience on the new marketplaces?

Senator Webb: When ACA was initially debated, enthusiastic Democrats suggested that buying health insurance on the marketplaces would resemble buying a book on Amazon.com. Millions of Americans can now buy affordable coverage. This is great. Yet the human experience of shopping on the marketplace is … not so great. It is actually pretty dreadful.

Fifty-eight percent of people visiting the new marketplaces rated their experience as “fair” or “poor.” Many shoppers are confused and frustrated. Because it’s confusing and difficult to properly compare plans, many people are making mistakes, most often buying a plan with the lowest monthly premium when this isn’t right for them.

What would you do to change that?

11. Oh yeah. Whatever happened to that public option?

Secretary Clinton: Many Democrats had hoped that the new marketplaces would include a “public option,” a public insurance plan for working-age adults ideally backed by the purchasing power of Medicare. We couldn’t get that passed in 2009.

Would you support a public option now?

Once you answer these questions, I’ll be happy to let you move on to that stupid email thing. It’s just that health reform affects millions of Americans. The next Democrat president will have to defend and extend what President Obama, Harry Reid, and Nancy Pelosi enacted more than five years ago. It’s shaped the Obama presidency. It may shape the next one, too.

*The encyclopedia of Twitter attributes this low degree-of-difficulty but good joke first to Peter Sagel.

<em>Harold Pollack is the Helen Ross Professor at the School of Social Service Administration. He is also Co-Director of The University of Chicago Crime Lab. He has published widely at the interface between poverty policy and public health. Pollack serves as a Fellow at the MacLean Center for Clinical Ethics at the University of Chicago, and as an Adjunct Fellow at the Century Foundation.</em>