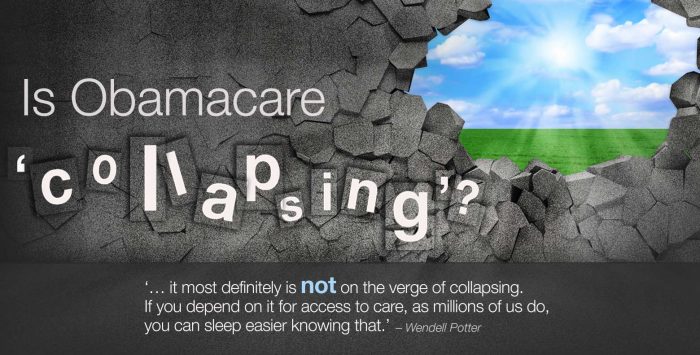 That same day, Jackie Dooley, a self-employed mom who lives in New York’s Hudson Valley, wrote this for the Huffington Post:

For the last three hours I’ve been crunching numbers, trying to figure out how not to pay $600 to $800 a month for a health insurance policy that won’t cover any medical expenses until I’ve paid anywhere from $7000 to $9000 in deductibles. Then, even if the deductible is met, I’d only get partial benefits until I pay an out of pocket maximum ranging from $11,000 to $14,000.

Just a few days earlier, Republican Senator John Barrasso of Wyoming predicted in an op-ed for the Washington Times that Obamacare will “collapse” this year.

“Unless something dramatic happens, this may be the year of the health care law’s collapse,” wrote Barrasso. “Prices keep rising and service keeps fading. It should not surprise the administration that people are not signing up.”

Barasso wrote that premiums in Alaska will go up nearly 40 percent next year and between 14 and 49 percent in Minnesota. And he noted that people who were enrolled in about half of the nonprofit co-ops authorized by the reform law are learning that their insurers are going out of business.

So is Barasso right? Is Obamacare collapsing?

The senator is right about one thing: some folks enrolled in Obamacare plans are indeed getting notices that their premiums will increase next year, and others are having to choose a different plan for one reason or another.

But no – emphatically no – Obamacare is nowhere close to collapsing. In many regards, it is a big success, much to the chagrin of the law’s critics.

The reality is that the increase in premiums for most people in 2016 will be relatively modest. According to an analysis by the Department of Health and Human Services, premiums will increase an average of 7.5 percent for the second-lowest-cost Silver insurance plan next year.

That’s significant because more than 68 percent of the nearly 10 million people who enrolled in an Obamacare plan in 2015 chose a Silver plan. A little more than 20 percent picked a Bronze plan. The remaining 12 percent enrolled in a Gold, Platinum or so-called catastrophic plan.

Keep in mind that the 7.5 percent increase is the average. The premium increases will be more in some states and lower in others – and even nonexistent some places. People enrolled in Silver plans in a number of states will actually see their premiums fall – from .7 percent in Ohio to 12.6 percent in Indiana.

Why the big variations? Keep in mind that the Obamacare exchanges didn’t even exist prior to 2014, which means insurers had no claims history to rely on when setting rates for that year. Some insurers did a pretty good job of guessing how much they’d have to pay for their enrollees’ medical care and set their rates at a level to cover those expenses and make at least a modest profit.

Those insurers did not increase premiums significantly for either 2015 or 2016. Other insurers underestimated – and in some cases grossly underestimated – how much medical care their enrollees would seek during the first year of the Obamacare exchanges. They are the ones that jacked up their rates the most for 2015 and 2016.

Another thing to keep in mind – and which Obamacare critics never mention – is that the law also seems to be helping to hold down the cost of health insurance for people who get their coverage through their employer – and that’s more than half of us who have private health insurance.

According to a recent study by Mercer, a big employee benefits consulting firm, health benefit costs per employee will rise by just 4.2 percent on average in 2016. That’s considerably less than the increases employers experienced during many of the years before the Affordable Care Act was passed.

It’s also important to keep in mind that before Obamacare, premiums in the individual health insurance market frequently went up far more than 7.5 percent. The annual increases were often in the double digits. Just months before the reform law was passed, Anthem Blue Cross of California announced that it planned to raise premiums by as much as 39 percent for many of its individual customers.

As for the failure of some of the co-op insurers that started operating after the Affordable Care Act was passed, the combined enrollment in those plans has never been more than a small fraction of the total number of people enrolled in Obamacare plans. Although it’s unfortunate they won’t be around next year, people who enrolled in those plans will be able to choose similar plans offered by other companies.

And in many states, there will be more insurers competing for customers than in 2014 or 2015. Keep in mind, too, that co-ops will continue to operate in several states in 2016.

So who doesn’t consider Obamacare a disaster?

Millions of Americans, many of whom were priced out of the insurance market before Obamacare (and many others who couldn’t buy coverage at any price because of a pre-existing condition). Since major provisions of the law went into effect two years ago, percentage of Americans without health insurance has dropped dramatically.

At the time the law went into effect, the uninsured rate was 15.7 percent. By the spring of this year, it had fallen to 9.2 percent, the lowest rate of uninsurance in half a century. That’s based on analyses of census data by the Centers for Disease Control and Prevention.

Here’s another way of looking at the positive effect of Obamacare: 16.9 million people became newly enrolled in coverage between September 2013 and February of this year. While most of those newly insured folks enrolled in private plans, several million low income Americans were able to sign up for Medicaid as the result of the program’s expansion in most of the states.

And that’s even considering the fact that several states have yet to expand Medicaid for their residents. But that is changing. Thirty-one states, including many that are led by Republican governors, have expanded their Medicaid programs, as has the District of Columbia.

Despite these gains, many Republicans in Congress – and most of the Republicans running for president – continue to call for repeal of the law. But despite the campaign rhetoric, there is ample evidence that the law is here to stay – and far from collapse. Yes, people in some states are not happy with increases in their premiums and deductibles, and for good reason, but many of them will be able to find comparable if not better coverage if they shop around.

And here’s another very important fact critics like Sen. Barasso never cite: nobody can be turned down for coverage anymore because of a pre-existing condition, thanks to Obamacare. And this fact: more than 80 percent of people who get coverage through the exchanges qualify for tax credits to help them pay for their premiums and in some cases reduce their out-of-pocket expenses.

It’s not a perfect law by a long shot, and critics will continue to take shots at it for political gain, but it most definitely is not on the verge of collapsing. If you depend on it for access to care, as millions of us do, you can sleep easier knowing that.