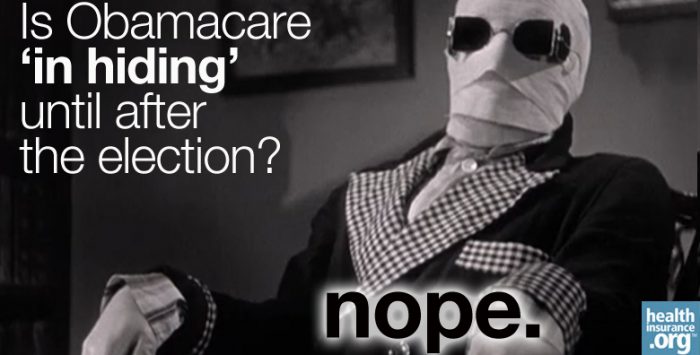 Bob Laszewski is one of the most prominent critics of the Affordable Care Act. However, unlike most, he’s also earned my grudging respect, mainly because he seems to be intellectually honest in most of his criticisms. Among other things, he’s the one who provided the 2-4 percent monthly attrition rate estimate for the individual insurance market which I’ve been using as the basis for my own estimates throughout the “off season.”

Laszewski (along with another outspoken ACA critic, Megan McArdle) also came up with a plausible theory as to why the HHS Dept. may have gone radio silent from May through August, only to suddenly release a single data point (7.3 million still currently enrolled in exchange QHPs) in mid-September. It remains to be seen whether this theory is correct or not, but it would answer at least some questions of mine, and no one else has presented a better possibility, so I have to at least respect Laszewski and McArdle for putting it out there.

In any event, last week, Laszewski wrote an op-ed for USA Today which built upon this criticism, and I’ve been asked to respond.

The main thrust of Laszewski’s piece is that the Obama administration is locking down as much information as possible about the second open enrollment period until after the election on November 4th.

Is the insurance industry under an HHS gag order?

Accusation #1: HHS is putting insurance companies under a gag order about how well/poorly HC.gov is working this time around:

Last week, The Wall Street Journal reported that the administration sent an email to the insurance companies participating in Obamacare telling them to keep their mouths shut about the testing of the new health law’s enrollment system saying, that unlike last year, they would require “all testers (the insurance companies) to acknowledge the confidentiality of this process” before they would be allowed to participate.

OK, I’m a bit skeptical about this one. Sure, it’s possible that HC.gov 2.0 is having similar headaches/technical bugaboos to last year, but I highly doubt it; the front end of the system, at least, has been operating very smoothly since around late December of last year, and was able to enroll over 5.4 million people in all, including massive volumes (upwards of 200,000/day) during the final surge in late March/early April.

In other words, the worst-case scenario would have HC.gov operating at least as well as it was last spring, which was quite good, thank you very much. Now, the back-end system (data transfers to the insurance companies and billing/payments) was still a mess at the time, but from a public POV (i.e., the voters) this didn’t matter much then and wouldn’t now either.

Accusation #2: The 7.3 million “currently enrolled as of 8/15” figure was released specifically because HHS knew a huge chunk of enrollees were about to be dropped right after that:

Last month the administration announced that 7.3 million people were insured under Obamacare as of mid-August. That was the first announcement of enrollment made by the administration since April. They provided just one number and no backup and admitted that they had been collecting enrollment data from insurers all along. They conveniently reported this figure just before enrollment is expected to take a big fall when thousands of people hit the deadline to clear up discrepancies in their income and legal resident status or risk losing subsidies or coverage altogether. We still don’t know how many lost coverage or are still in limbo.

This was the crux of Laszewski/McArdle’s theory back in September, when the “7.3M” number was announced … except that at the time, they were assuming that the reason for the imminent drop in enrollments after August would be the “three-month grace period” that the ACA allows people to take advantage of before insurance companies drop them.

The idea they presented was that the 3.8 million or so people who enrolled in March and April – most of whose policies didn’t start until May 1st – had paid their first month’s premium, then gotten scared off by the price and bailed, but the insurers would then have to wait until September 1st to actually drop them from the policy.

Again, it’s possible that this has happened … but 1) it’s noteworthy that Laszewski has dropped this line of reasoning from his op-ed and 2) the one “three-month grace period” data point which is available, from Arkansas just 2 days ago, shows that only 827 people out of 38,210 QHP enrollees – 2.1 percent – fit into this category. I’m sure the number varies from state to state, but if Arkansas is typical, this doesn’t seem to be a major issue. That’d be around 153,000 people.

Hiding a ‘nosedive’ in QHP numbers? Not likely.

As for the “drop source” which Laszewski does suggest in his op-ed (the 363,000 “income discrepancy data” and 115,000 “legal resident status data” issues), again, neither of these seem likely to cause a major nosedive in QHP enrollments between August and November. Any serious income discrepancies wouldn’t cause the enrollee to lose their policy, just their tax credit.

Now, losing that credit may in turn cause them to decide to drop the policy if they can no longer afford it, but seeing how that didn’t happen until this month anyway, I’d imagine most of them are likely to stick it out through the first year since the second open enrollment period is almost upon us anyway. Assuming that every single one of those 363,000 lose their tax credit (which I highly doubt), I’d imagine that perhaps, say, one-fourth of them would drop their exchange coverage. That’s about 90,000 people.

Now, the citizenship/immigrant status cases are more serious; those who failed to provide proof of legal status by Sept. 30th have indeed had their policy cancelled completely by now. And no, there hasn’t been an update on the number who did lose coverage as of yet.

However, as I noted last week, in California, at least, 87 percent of their enrollees in this situation (which was actually higher than the number via HC.gov) have had their status cleared, with another 6 percent under review. They’ve only actually sent termination notices out to 7 percent of the total. If that rate holds true nationally, we’d likely only be looking at perhaps 20,000 people being dropped, or around 0.3 percent.

My guess is that all three of these situations combined (three-month grace period, policies dropped due to lost tax credits or terminated due to legal status issues) amount to no more than about 3.6 percent of the 7.3 million figure given as of August 15 … or perhaps 260,000 people at most. Even if that’s true, that still leaves the total enrolled at right around 7 million even … the exact number that the CBO originally projected would be enrolled through the end of 2014 in the first place.

Accusation #3: The low average-premium increases scheduled for 2015 (only around 5.9 percent nationally as of this writing) are a smokescreen and the real prices are being hidden until after the election:

The administration has trumpeted the low average health insurer rate increases for 2015. But these low average increases have more often been low because the majority of insurers who did not get much enrollment have cut their rates while the insurers that got most of the enrollment have raised their rates. But current participants in the 36 federally run state insurance exchanges and most state-run exchanges won’t see their own renewal rates until the open enrollment is about to begin. In short, the administration is comparing different plans with different benefits between 2014 and 2015. Those who want to keep the same plan might have big price increases.

I admit to getting a bit of a chuckle from the second sentence; this is exactly how capitalism is supposed to work, isn’t it? Competitors with low market share cut their prices while the ones with higher market share often raise their prices. Presumably, the increased competition should reach equilibrium; that’s the “invisible hand of the free market” and all that, right?

However, he’s absolutely correct about one thing: In order to keep their rates low, most people will indeed have to shop around and possibly switch from one insurer to another. Of course, this is no different than it was before Obamacare, so I’m not quite sure I understand the fuss.

Admittedly, that’s also the nature of free enterprise; in theory, you might get a better deal on gas, milk or your wireless provider if you switched from one store to another whenever it was time to re-up, but most people tend to stick with the same vendor out of convenience and habit. That’s actually one of the downsides of free enterprise as well, actually, and a strong argument in favor of single payer when it comes to health insurance in my view, but that’s a different argument.

He’s absolutely correct that current participants on HC.gov will find it difficult to find their renewal rates until around November 9th, a week before open enrollment and a week after the election, and I do agree that if this is technically feasible to have available earlier (even if only for some states), HHS should do so.

However, if this information was being kept under wraps for purely political reasons, they’re doing a pretty poor job of it. Nevada is moving to the federal exchange this year, after all, and they have every one of their 2015 rates listed, plain as day, on their state insurance website. You can compare 2015 to 2014 across companies, metal levels, ages and everything.

As an aside, I should note that “difficult” is not the same as “impossible.” Many of the state insurance commissioner websites already have their 2015 exchange rates available publicly. For instance, here’s Utah’s. Let’s suppose I’m a 21-year old living in Beaver County and I have a Select Med Preference Benchmark Silver 1000 policy. Right now I’m paying $166/month (before any tax credit). If I stick with the same policy next year, that’ll go up to $178/month, or about a 7.2 percent increase.

In any event, I do agree that it shouldn’t be necessary to play guessing games, read tea leaves and so on. I’ve been screaming at the HHS Dept. louder than anyone for full transparency about this stuff, not because I suspect that the underlying data is “bad” but because I’ve proven time and time again that it’s actually pretty damned good.

So. Is politics involved? To some degree, I’m sure it is. Of course I’m sure that the Republican Party would never distort or disrupt the normal business of government for purely political reasons, when it comes to the Affordable Care Act, right? 🙂