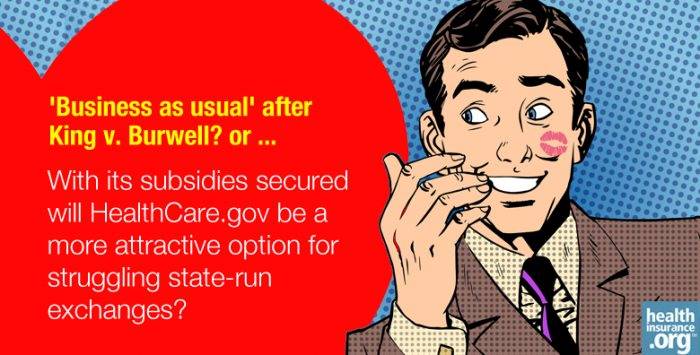 Ever since the Supreme Court agreed last November to hear King v. Burwell, the case has been a constant specter in the 34 states that use the federally facilitated marketplace (FFM), and possibly the three others that use HealthCare.gov but are considered supported state-based marketplaces (SSBMs). The prospect of a plaintiff win – and the evaporation of subsidies for nearly 6.5 million people – triggered a constant flow of gloomy news articles.

But today, we can breathe a sigh of relief. The ACA has weathered its second Supreme Court case, and subsidies are safe. The insurance markets in the FFM states are not heading into a death spiral. The uninsured rate – which was predicted to spike if the Court had sided with the plaintiffs – will likely continue its downward march in the coming years.

Clearly, the Court’s decision is beneficial to millions of Americans – not only those who are receiving subsidies, but everyone who purchases individual health insurance in the states where HHS is running the exchange. If subsidies had been eliminated, the American Academy of Actuaries had projected premium increases averaging 35 percent in the FFM states. Thankfully, we no longer have to worry about that.

All the contingency plans and what-if scenarios that have been floating around for the last several months can be relegated to the history books – and that’s certainly cause for celebration. But will there be any impact from the Court’s ruling in King v. Burwell, or is it just business as usual?

Could premiums come down?

If subsidies had been eliminated in FFM states, premium increases would have been ugly. There was some optimistic speculation however, that if subsidies were upheld, premiums might actually decrease.

Earlier this year, it was thought that the uncertainty surrounding the King case might result in higher proposed premiums for 2016, since those rates had to be filed before we knew that the subsidies would be upheld. And so it was posited that perhaps a government win in the King case would result in a downward revision of those rates.

But in conversations with Insurance Commissioners nationwide, I haven’t found that to be the case.  Some states had already asked carriers to submit a back-up set of rates that were to be used if subsidies had been eliminated, and other states were willing to let carriers submit new rates if the Supreme Court had ruled for the King plaintiffs.

But the general consensus in the majority of the states is that the primary rates that have been filed for 2016 are based on actual claims experience over the past year, and were also based on the assumption that subsidies would continue to be available in every state.

In short, while a plaintiff win would have resulted in many carriers re-submitting higher rates for 2016, in most states today’s ruling shouldn’t have an impact on rates that have already been filed.

What we might see however, is a gradual shift to HealthCare.gov among states that currently run their own exchanges. Now that subsidies are safe in the federally-facilitated marketplace, it stands to reason that other states might follow the lead set by Oregon, Nevada, and most recently, Hawaii.

All of those states started out with fully state-run exchanges, but have become SSBMs instead. (Hawaii has just begun the transition). New Mexico also has a SSBM, although it has always used HealthCare.gov for individual enrollment.

SSBMs retain oversight at the state level, and can provide state-based customer service, but they use HealthCare.gov’s enrollment platform.

Prior to today’s Supreme Court ruling, there were questions about the continued availability of subsidies in SSBMs. Most scholars said it was unlikely that a plaintiff win would eliminate subsidies in SSBMs, but there was plenty of uncertainty around the issue, and the only completely safe harbor prior to today’s ruling was a fully state-run exchange. Now that HealthCare.gov no longer comes with the caveat of possibly not being able to offer subsidies, will it be a more attractive option for struggling state-run exchanges?

Technology has also been an ongoing battle for state-run exchanges. HealthCare.gov had its own technological problems early on, but has been operating smoothly for a year and a half now, and presents a solid option for states where technology has proven to be a significant hurdle.

Switching to HealthCare.gov isn’t an overnight fix though, and it can be expensive. The transition itself is estimated to cost about $10 million per exchange (possibly as high as $20 million, although the federal government may be willing to provide financial assistance with the transition). In states that transition to HealthCare.gov, the new technology platform also means that current enrollees must re-enroll during open enrollment, although states that have already made the switch describe a smooth re-enrollment process.

Marketplaces with reasons to convert

Among the remaining fully state-run exchanges, Minnesota, Vermont, Maryland, DC, Rhode Island, Washington, Colorado and even New York have all been mentioned in reports of the financial struggles faced by state-run exchanges – despite the fact that some of those exchanges are generally considered quite successful.

Although Republican lawmakers in most of those states have expressed a desire to shutter the state-run operations, the exchange boards and Democratic lawmakers have tended to push forward in an unrelenting effort to keep their state-run exchanges (except Vermont, where the pro-ACA Governor has clearly stated that a switch to HealthCare.gov would be considered if the exchange is unable to rapidly fix its technology glitches. The Vermont House Committee on Health Care will continue to meet this summer to determine whether the state should pursue alternatives to the current exchange.)

But it’s impossible to ignore the economies of scale that go along with Healthcare.gov. It’s not a sign of defeat for an exchange to utilize HealthCare.gov. Working with the federal government on an SSBM or a partnership exchange could be a way to minimize costs and technological headaches, while still providing consumers with customer service, an efficient shopping mechanism for insurance, and – now without a doubt – premium subsidies.