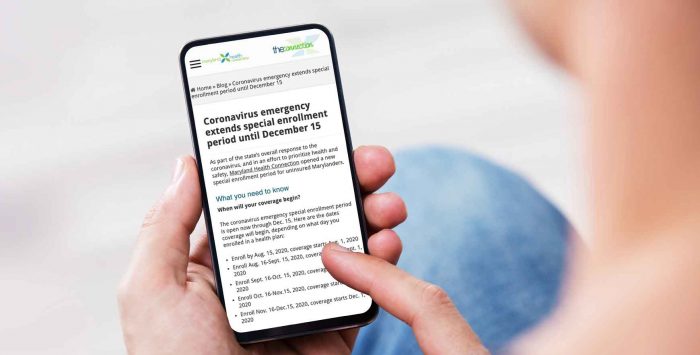 The Maryland Health Connection has reopened a COVID-19 special enrollment period and has announced it will remain open until December 15.

Like most of the other state-run exchanges, Maryland Health Connection opened an enrollment window this spring to address the COVID-19 pandemic, allowing uninsured residents to sign up for health insurance, even if they didn’t have a qualifying event. More than 54,000 people had signed up by mid-July, when the window ended. But last week, Maryland Health Connection reopened the special enrollment period and announced that it will continue until December 15. The extension through mid-December will allow uninsured people the option of enrolling with nearly immediate (or even retroactive) coverage – even during open enrollment this fall. (People who use the normal open enrollment window will have coverage effective January 1, 2021; the COVID-19 special enrollment period will allow uninsured Marylanders to get coverage without having to wait until January.)

COVID-19 special enrollment periods are still underway in New York, Vermont, California, and Washington, DC, although Vermont’s ends on Friday and New York’s ends on Saturday (assuming no additional extensions). The federal government opted not to offer a COVID-19 special enrollment period for HealthCare.gov, which is used by residents in 38 states. Democratic lawmakers have long decried that decision, and continue to urge the Trump administration to reconsider. Last week, 25 Democratic Senators sent a letter to the president, asking him to open an enrollment period on HealthCare.gov to allow uninsured residents an opportunity to get health coverage for the remainder of 2020.

In keeping with the trend that we’re seeing in numerous states across the country, North Carolina’s health insurance marketplace will gain some new insurers in 2021. Oscar will join the exchange in the Asheville area. UnitedHealthcare will rejoin the exchange, after exiting at the end of 2016, and it appears that Sentara/Optima – which currently offers individual-market coverage in Virginia – will also join North Carolina’s exchange for 2021.

New Mexico CO-OP will close at the end of 2020, leaving just three CO-OPs in U.S.

Just four of the original 23 CO-OPs that were created under the ACA are still operational this year, and that will drop to three as of 2021. New Mexico Health Connections announced this week that it will close at the end of 2020; its 14,000 members will need to select new coverage during the open enrollment window that starts November 1, 2020.

The New Mexico Office of the Superintendent of Insurance has published FAQs about the CO-OP closure, clarifying that members do not need to do anything now, and will have an opportunity to pick a new plan during open enrollment (November 1 – December 15). Members who have their coverage through the New Mexico marketplace (HealthCare.gov) will be automatically enrolled in a comparable plan from another insurer if they don’t select their own new plan during open enrollment.

Last month, HHS approved Pennsylvania’s reinsurance proposal. As of 2021, New Hampshire and Pennsylvania will join a dozen other states where active reinsurance programs are keeping individual-market health insurance premiums lower than they would otherwise be, and providing general stability to the markets.

Nebraska’s Medicaid expansion coverage takes effect in October, nearly two years after voters in the state passed a Medicaid expansion ballot measure. Enrollment began on August 1, and in the first six days, 2,692 applications were submitted. Nebraska initially projected that 90,000 people would gain eligibility for coverage under Medicaid expansion, but a Families USA analysis determined that an additional 33,000 people might be eligible due to the widespread job losses caused by the COVID-19 pandemic.

In June, the IRS issued proposed regulations that would allow healthcare sharing ministry expenses and direct primary care expenses to be tax-deductible medical expenses for filers who itemize their deductions, and allow employers to reimburse these membership fees using health reimbursement arrangements. This week, attorneys general from 20 states – led by California Attorney General Xavier Becerra – sent a letter to the IRS, expressing opposition to the proposed rule and asking that it be withdrawn.

The attorneys general note that the proposed rule will increase consumer confusion, making it harder for people to realize that healthcare sharing ministry plans are not real health insurance and should not be considered an adequate substitute for major medical coverage. They also point out that the rule would further segment the market, with healthy people increasingly opting for non-insurance coverage, while sick people remain in the ACA-compliant market. The letter also charges that the proposed rule is arbitrary and capricious, and goes beyond the authority that the IRS has.