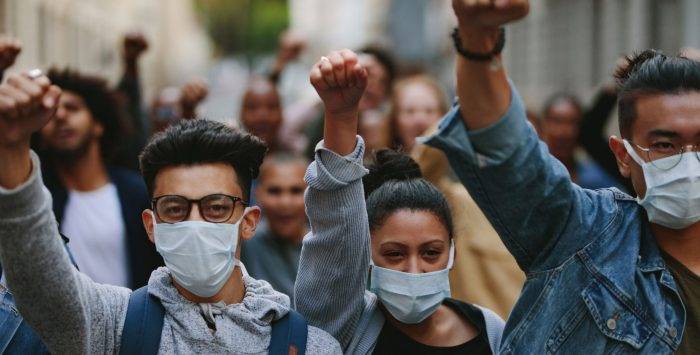 Colorado's Division of Insurance has published a proposed bulletin clarifying that health insurers cannot use riot exclusions to deny coverage to members who are injured during protests. Image: Jacob Lund / stock.adobe.com

Millions of Americans have lost their employer-sponsored health insurance as a result of the COVID-19 pandemic, adding an insurance crisis to a health crisis. But the loss of employer-sponsored health coverage is a qualifying event that triggers a special enrollment period in the individual market, so people who lose their health insurance have an opportunity to buy individual market coverage. (If COBRA is an option, they also have an extended opportunity to elect COBRA and pay the premiums.)

And there are still ongoing special enrollment periods in several state-run exchanges that allow anyone without health insurance to enroll – even if they don’t have a qualifying event. These enrollment windows end next Monday (June 15) in Maryland, New York, and Vermont, so uninsured residents in those states only have a few more days to sign up for coverage. (After June 15, residents will need a qualifying event in order to enroll.)

For the third year in a row, insurers that offer coverage in Maryland’s marketplace have proposed rate decreases for 2021. The rate decreases are largely a result of the state’s successful reinsurance program, which has been holding down premiums since 2019. The proposed rate decreases do not include a rating factor to account for COVID-19, although the insurers note that this could change as the summer goes on and more data become available.

UnitedHealthcare is joining the Maryland exchange in 2021 in 14 counties, under the name Optimum Choice. United’s filing does include a rating adjustment due to COVID-19, although the exact percentage has been redacted.

The 12 insurers that offer individual-market plans in New York’s health insurance marketplace have filed rates for 2021, amounting to an average proposed rate increase of nearly 12 percent. State regulators will examine those rates over the coming months, but in previous years they have consistently approved smaller rate increases than the insurers proposed.

New York has been the epicenter of the nation’s COVID-19 crisis, so it’s not surprising that New York insurers have incorporated COVID-19 into their proposed rates to a larger degree than the handful of other states where filings have been published thus far. There are a few New York insurers that didn’t include a rating factor associated with COVID-19 in their proposed rates for 2021, but most of them did. The COVID-19 factors range from 0.5 to 8.4 percentage points, and address costs ranging from vaccine and antibody testing to increased elective services in 2021 that were delayed this year.

[UPDATE: This bulletin was finalized in late June.] Colorado’s Division of Insurance has published a proposed bulletin clarifying that health insurers cannot use riot exclusions to deny coverage to members who are injured during protests. The bulletin notes that people participating in protests are not committing illegal acts, rioting, assembling unlawfully, etc., and health insurers cannot use those types of exclusions to reject protest-related claims. Comments can be submitted on the proposal until June 11, 2020.

Kentucky governor commits to getting 100% of black residents insured

The COVID-19 pandemic has highlighted the stark racial healthcare inequality in the United States with black Americans representing a disproportionate share of the people who have died from the disease. Earlier this week, Kentucky Gov. Andy Beshear announced basic details of his plan to “begin an effort to cover 100 percent of our individuals in our black and African American communities.” Beshear noted that the state would “be putting dollars behind [this effort], we’re going to have a multifaceted campaign to do it. It is time, especially during COVID-19.”

Beshear’s plan involves having “health insurance connectors” reach out to black residents to help them enroll in coverage. A lot of details have not yet been clarified, including how the state will insure people who aren’t eligible for (or can’t afford) existing coverage programs, as well as the question of how the state might address potential discrimination complaints stemming from the initiative. Black and white Kentucky residents have nearly equal uninsured rates – both at just under 6 percent. (Hispanic residents have a far higher uninsured rate, at 24 percent.) But black residents account for 16.5 percent of COVID-19 deaths in Kentucky, despite being only 8.4 percent of the state’s population.

At the Colorado Sun, John Ingold explains a new bill that’s being considered by Colorado lawmakers in an effort to keep health coverage more affordable. Colorado Senate Bill 215, which passed in the Senate earlier this week, calls for the state to start collecting a new fee assessed on health insurance premiums for health plans that are regulated by the Colorado Division of Insurance (ie, individual plans and fully-insured group plans, but not self-insured group plans). The idea is that the fee would replace the federal Health Insurance Tax, which is being eliminated at the end of 2020. The bill would also introduce a new assessment on hospitals in the state, which would replace (albeit at a lower amount) the current fee that’s used to fund Colorado’s reinsurance program.

The money generated by the new fees would be used to extend the state’s reinsurance program, which is currently only funded through 2021, for five more years. Any revenue in excess of the amount needed to fund the reinsurance program would be used to provide state-based subsidies to make coverage more affordable, and to fund outreach and enrollment activities. The state-based subsidies would be available to people who get federal premium subsidies (a nod to the fact that the reinsurance program on its own has made coverage less affordable for many of these enrollees) as well as people with income up to 300 percent of the poverty level who don’t get premium subsidies – including undocumented immigrants and people caught by the family glitch.

SB215 has passed the Colorado Senate and is now with the House. New Mexico lawmakers tried to implement a similar bill earlier this year; it passed in the New Mexico House, but died immediately in the Senate.

Earlier this week, the IRS issued proposed regulations that would relax the tax rules regarding direct primary care memberships and health care sharing ministry plans. The regulations are a result of an executive order that President Trump signed last year, calling for the Department of the Treasury to propose regulations that would allow “certain types of arrangements, potentially including direct primary care arrangements and healthcare sharing ministries” to be considered deductible medical expenses.

Comments on the proposed regulations can be submitted through August 9, 2020.

At some point last year, you probably got a spam phone call – or several – with a recording that promised access to health insurance from nationally known insurance companies. The calls came from fake phone numbers, disguised to look like local businesses, friends, or family members. And if a person pushed the button to learn more about the available health plans, they were transferred to a call center that didn’t actually offer the name-brand health insurance policies that had been mentioned in the recording.

More than a billion of these calls were organized by two Texas residents, John Spiller and Jakob Mears, and their businesses, Rising Eagle and JSquared Telecom. This week, the Federal Communications Commission proposed its largest-ever fine, of $225 million, against Spiller and Mears for violating federal telemarketing rules.

This is good news for consumers who would like to see an end to deceptive robocalls. But FCC Commissioner Jessica Rosenworcel explains that the Department of Justice has declined to get involved in the case, and their participation is vital in terms of actually collecting on fines imposed by the FCC.