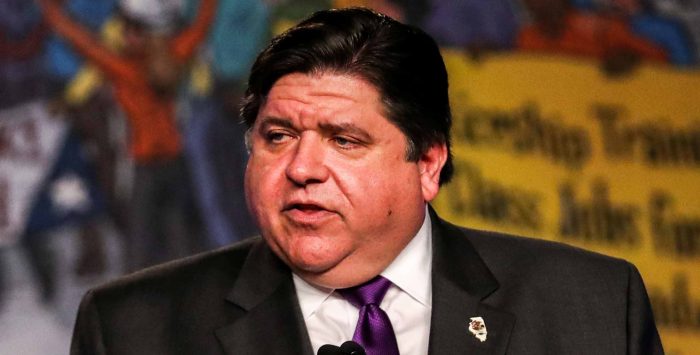 An Illinois bill that would limit how much state-regulated insurers can require members to pay for insulin awaits Gov. J.B. Pritzker’s signature. | (April 9, 2019) REUTERS/Jeenah Moon

Earlier this year, Colorado became the first state in the country to limit how much state-regulated insurers can require members to pay for insulin; the state’s $100/month cap takes effect in January. Illinois is now on the brink of enacting a similar bill, which would take effect in 2021. Illinois S.B.667 was approved by lawmakers earlier this month, and awaits Gov. J.B. Pritzker’s signature. If it’s enacted, Illinois residents with state-regulated (ie, not self-insured) individual or group health plans will have to pay no more than $100/month for insulin starting in 2021.

Tennessee has not expanded Medicaid under the ACA. But the state is awaiting federal approval for a proposed Medicaid work requirement, and is now the first state in the nation to submit a proposal for Medicaid block grant funding. In response to critical public reaction to the draft proposal, the final version of the proposal indicates that the state will not use the block grant waiver authority to reduce benefits under the TennCare Medicaid program.

BYU-Idaho will continue to allow students to rely on Medicaid

For the last few weeks – in this edition of The Scoop and this edition – we’ve been talking about BYU-Idaho’s controversial decision to stop allowing students with Medicaid to waive coverage in the school’s health plan as of 2020.

Idaho’s newly expanded Medicaid eligibility rules mean that many more students will be eligible for Medicaid as of January, but BYU-Idaho’s decision had caught students off guard and some were making plans to withdraw from the school as a result. Now BYU-Idaho has reversed course, issued an apology for the “turmoil” the school had caused, and announced that BYU-Idaho will continue to allow students with Medicaid to waive coverage under the school’s health plan. Unlike most student health plans, BYU-Idaho’s plan is self-insured and does not have to comply with the ACA. So the coverage is less robust than Medicaid, and also more costly for students.

A federal district judge in Oregon has issued a preliminary injunction blocking the Trump administration’s proclamation on health insurance for immigrants. The new rules were largely unworkable, and would have required prospective immigrants to have health insurance or obtain it within 30 days, albeit without using premium subsidies in the exchange. The injunction, which applies nationwide, means that the new rules will not take effect for the time being.

Last year, the Trump administration changed the rules for short-term health plans, allowing them to have total durations – including renewals – of up to 36 months. Some states have taken action to limit or ban short-term plans, but others have embraced these plans as a potential alternative for their healthier residents.

Insurers in some areas have begun to offer new short-term products that are something of a hybrid of ACA-compliant plans, traditional short-term plans, and pre-ACA plans.

A new plan that became available in Nebraska this fall is being marketed as “a great alternative to traditional Affordable Care Act plans,” although buyers should certainly read the fine print. Another new product is being rolled out in Idaho on December 1, under the state’s new “enhanced” short-term plan rules. Last year, CMS rejected Idaho’s plan to create non-ACA-compliant “state-based” plans. But CMS encouraged Idaho to essentially do roughly the same thing by using short-term plans, and that’s what the state is doing.