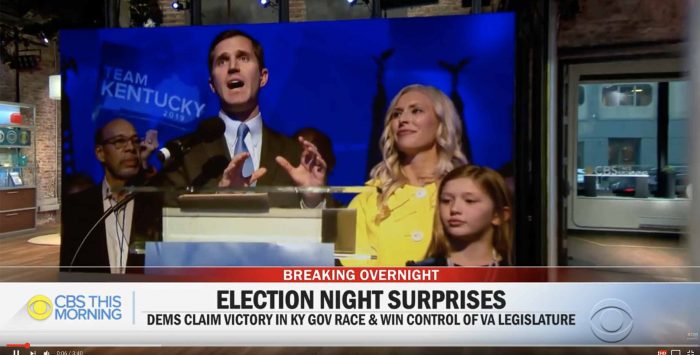 Election results this week in Kentucky and Virginia are likely to shore up Medicaid expansion in both states. | Image: Screenshot from YouTube

Open enrollment for 2020 individual-market health insurance plans is underway nationwide. It will end in most states on December 15, although some states have extended their enrollment deadlines. Here’s an at-a-glance summary of important things to keep in mind during open enrollment; you can also read our more in-depth guide to open enrollment.

Enrollment in Idaho’s expanded Medicaid began on November 1, and the Idaho Department of Health and Welfare reports that nearly 35,000 people have already enrolled.

On November 2, a federal judge in Oregon issued a temporary restraining order to block implementation of President Trump’s proclamation regarding health insurance coverage for new immigrants. The rules had been slated to take effect November 3, and would have required new immigrants to show proof of health coverage or the financial means to pay for their own medical needs.

From 2014 through 2019, Nevada law required health plans sold outside the exchange to be available for purchase year-round, albeit with a waiting period of up to 90 days. But that’s no longer the case, as a result of a new law that took effect in Nevada last month. Off-exchange plans in the state are now only available during open enrollment or with a qualifying event, as is the case in the rest of the country.

Georgia has proposed a partial expansion of Medicaid

Last week, we gave you a heads up that Georgia was expected to unveil a proposal to partially expand Medicaid this week. While a partial expansion of coverage is better than nothing for the state’s poorest residents, Georgia’s newly unveiled proposal is expected to only cover about 52,000 people, as opposed to more than 400,000 who would gain eligibility with full Medicaid expansion. Georgia’s proposal would provide Medicaid coverage to those with incomes under the poverty level, as long as they work at least 80 hours per week. Enrollees with income above 50 percent of the poverty level would also have to pay monthly premiums.

Georgia has also proposed a 1332 waiver that would create a reinsurance program starting in 2021. But Georgia’s proposal goes well beyond that: It calls for the state to stop using HealthCare.gov as of 2022 and instead rely on web brokers and insurers to enroll residents in plans that would be eligible for premium subsidies. These would include QHPs as well as guaranteed-issue non-QHPs with lesser benefits.

The Trump Administration has approved Medicaid work requirements in several states, including Indiana, but work requirements have been facing an uncertain legal future, with federal courts overturning them in some states. Indiana had been phasing in its work requirement this year, and enrollees would have started losing coverage for non-compliance as of January. But the state has now suspended the program, pending the outcome of a lawsuit that is challenging the work requirement.

Under former governor Steve Beshear, Kentucky expanded Medicaid and implemented a state-run health insurance exchange that was widely considered among the most successful in the country. But under his successor, Republican Matt Bevin, Kentucky started using HealthCare.gov and has worked to implement a heavily contested Medicaid work requirement. On November 5, however, Bevin lost his re-election bid to Democrat Andy Beshear, who is Kentucky’s Attorney General and Steve Beshear’s son. Beshear’s healthcare proposal indicates that he plans to reverse course on the Medicaid work requirement and potentially revive the state’s health insurance exchange platform — time will tell how this all plays out.

After a long legislative battle, Virginia expanded Medicaid at the start of 2019, and more than 325,000 people have since enrolled in the program. But the state’s legislature had a slim Republican majority that insisted on a Medicaid work requirement, which is still in the process of garnering federal approval. On Tuesday, Democrats in Virginia flipped both chambers of the state’s legislature, helping to cement Medicaid expansion going forward and potentially allowing lawmakers to reverse course on the work requirement.