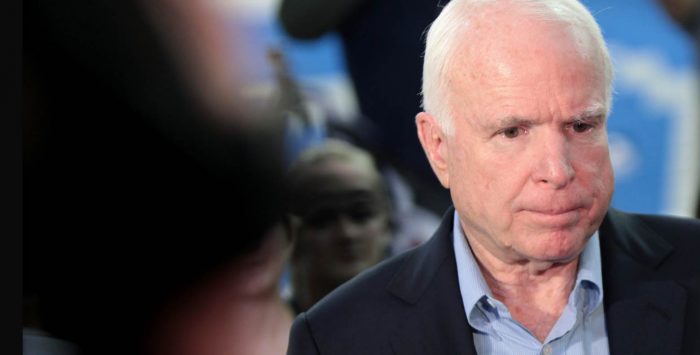 Last week, we heard the sad news that Senator John McCain has been diagnosed with glioblastoma. McCain had surgery at Phoenix’s Mayo Clinic in mid-July, and it’s expected that he’ll also receive chemotherapy and radiation, along with other potential treatments. Senator McCain has proven time and again that he’s tough as nails, and appears to be facing this latest battle head-on. One thing that he likely has on his side is top-notch health insurance.

McCain is 80, which means he’s presumably been on Medicare for 15 years. Currently serving federal lawmakers are able to obtain employer-subsidized coverage in the Washington DC small-business exchange, and they can have this coverage in addition to Medicare.

How good is McCain’s coverage?

McCain hasn’t said publicly exactly what insurance he has, and his office has not responded to my inquiry. But the most likely scenario is that he has Medicare plus employer-sponsored coverage through the DC exchange – a very comprehensive benefits package.

There are certainly lots of other people who have similar coverage arrangements – either because they’re still working after turning 65, like McCain, or because they receive generous retiree health benefits that supplement their Medicare coverage. For those who don’t, there are private Medicare supplements available that cover virtually all of the out-of-pocket costs associated with Medicare.

But health coverage in the United States is a bit of a mixed bag, with some people having much better coverage than others. A serious illness tends to shine a spotlight on the flaws that exist in some health plans, so let’s take a look at how the average American facing a glioblastoma diagnosis would fare under various health plans.

Most employer-sponsored health insurance plans provide pretty solid health coverage. According to a 2016 Kaiser Family Foundation analysis, the average deductible for covered workers was about $1,500, and that doesn’t count the 17 percent of covered workers whose plans had no deductible at all.

In addition, the average employer paid more than two-thirds of the total premiums. And the tax exclusion of employer-sponsored insurance premiums amounts to a subsidy that cost the federal government $250 billion in fiscal year 2016.

However, employer-sponsored health insurance is, by definition, linked to employment. A person going through a serious illness like glioblastoma might not be able to continue working, depending on the specifics of the treatment.

As long as the employer has at least 20 employees, the employee will be able to continue the coverage under COBRA for 18 months, even if he or she is unable to work. But COBRA is expensive, as the employer contribution to the premiums and the tax exclusion of the premiums are eliminated. (COBRA premiums are counted as a medical expense for the purpose of itemized medical deductions, but only expenses that exceed 10 percent of your income can be deducted this way.)

Although most employer-sponsored plans provide good coverage, that’s due in part to the ACA. It was not uncommon – particularly in low-wage, high turnover industries – for employers to offer “mini-meds” before the ACA, with exceedingly low benefit caps. (The ACA’s ban on lifetime and annual benefit limits means that these plans are no longer offered to employees.)

A mini-med with a $2,000 or $5,000 annual benefit maximum would not have done much in the face of glioblastoma. Vox reported that just the initial craniotomy to remove a blood clot above Senator McCain’s eye would likely have been billed at more than $76,000. And that was before the cancer diagnosis.

The pre-ACA individual market included plenty of solid plans. But dubious coverage also abounded, and regulations varied considerably from one state to another.

The ACA imposed a bevy of regulations on the individual health insurance market, bringing all new (as of 2014) plans up at least a basic minimum standard. Individual major medical coverage can no longer be sold without the ACA’s essential health benefits.

And for those benefits, insurers cannot limit how much they’ll pay during a year or over the course of an insured’s lifetime. (Sadly, another Arizona resident with cancer, Arijit Guha, died in 2013 at age 32. Guha’s health insurance plan had a $300,000 lifetime cap – which is no longer allowed, thanks to the ACA – and his treatment, including chemotherapy that cost $11,000 per session, quickly exceeded that limit.)

Individual-market plans also cannot discriminate against people with pre-existing conditions, either by charging them higher prices or declining their applications (both of those were standard practice in nearly every state prior to 2014). Notably, Senator McCain has a history of melanoma, which would have virtually guaranteed a declined application in the individual market pre-ACA if he had been in need of non-group coverage for some reason.

A person with ACA-compliant individual market coverage would have solid coverage for glioblastoma. The maximum out-of-pocket costs during 2017 would be $7,150, although most plans have out-of-pocket maximums below that threshold. And 57 percent of people who enrolled through the exchanges in 2017 have cost-sharing subsidies, which further reduce the out-of-pocket costs.

The American Cancer Society explains in more detail how the ACA improves access to care for people with cancer. But the short story is that a person facing glioblastoma with a 2017 individual health insurance policy has a much more secure financial safety net than someone with the same diagnosis a decade ago.

Medicaid provides comprehensive coverage. Although the benefits available under traditional Medicaid vary from one state to another, Medicaid expansion coverage is required to include the ACA’s essential health benefits. (The Senate’s Better Care Reconciliation Act – BCRA – would eliminate this requirement after 2019.)

Medicaid has minimal cost-sharing, limited to no more than 5 percent of a family’s annual income.

It’s true that compared with private health insurance and Medicare, fewer medical providers accept Medicaid. But the majority do work with Medicaid. (According to a Kaiser Family Foundation analysis, about 69 percent of office-based physicians accept new Medicaid patients, while about 85 percent accept new privately-insured patients.)

Short-term plans do not cover pre-existing conditions. So if you were to be diagnosed with glioblastoma while covered under a short-term plan, the first thing the insurer would do is go back through your medical records to make sure that you didn’t have any symptoms prior to enrolling in the plan.

Assuming you were healthy before you enrolled, your short-term plan would start to cover your treatments. But you would be facing a looming and inflexible coverage termination date, along with annual and lifetime benefit maximums. Short-term plans vary considerably in quality – some have lifetime benefit maximums of $250,000 or less, while others provide benefits well in excess of a million dollars. In the case of a glioblastoma diagnosis, coverage would end when the policy reached its predetermined end date, or when you hit your benefit maximum – whichever happened first.

Either way, you’d want to hope that you had other coverage already lined up and ready to go at that point. The cancer diagnosis would make it impossible to obtain another short-term policy.

And since a short-term plan is not considered minimum essential coverage, the termination of the short-term policy would not trigger a special enrollment period for individual or employer-sponsored insurance. You would still be able to enroll in a regular individual-market plan, or an employer plan if you’re eligible for one, during regular annual open enrollment. But you might experience a significant gap in coverage, which can be disastrous in the middle of cancer treatment.

Limited-benefit plans are another category of coverage that’s not regulated by the ACA (despite attempts by the Obama Administration to place some regulations on certain types of fixed indemnity coverage).

Fixed indemnity means that the plan pays a specific dollar amount if the insured has a covered claim. For example, the plan might pay $1,000 per day for hospitalization, or $50 for a doctor visit. There’s no cap on how much the patient has to pay, and these plans often have very low annual and lifetime benefit limits.

So imagine a plan that will pay $2,000 per day for hospitalization, for up to 25 days. It will also pay $2,500 for an outpatient surgical procedure and $2,500 for an inpatient surgical procedure. And it will pay $625 for anesthesia, but it does not cover prescriptions (these numbers are from a real plan currently available in the limited benefit market).

Remember that McCain’s craniotomy – before the glioblastoma was even diagnosed – likely cost $70,000. He was home very soon after the surgery, so if he was hospitalized at all, it wasn’t more than a day or two. A limited benefit plan like the one described above would have paid $2,000 for each day in the hospital (which amounts to zero dollars if the procedure didn’t result in an inpatient stay), $2,500 for the surgery, and $625 for the anesthesia. That would leave a sizeable chunk of the $70,000 bill as the patient’s responsibility.

And all of that is before the treatment for the glioblastoma even begins.

In mid-July, Senator Ted Cruz introduced an amendment to the BCRA aimed at reducing regulations on health insurance plans. The Cruz Amendment, if included in the BCRA, would allow insurers to offer non-ACA-compliant plans as long as they also offered at least one Silver plan, one Gold plan, and one plan that complies with the BCRA’s benchmark standards (58 percent actuarial value).

The non-compliant plans would likely range from decent to terrible, since they would have wide latitude in terms of the consumer protections they’d be able to waive. Essentially, it would be a return to the pre-ACA days when there was more of an “anything goes” approach to health insurance. Plans would be available without essential health benefits, would not have to cover pre-existing conditions, and could be offered with higher out-of-pocket limits than ACA compliant plans.

These plans would likely appeal to healthy people, as they would be less expensive than ACA compliant plans. But a person who seems perfectly healthy can be diagnosed with glioblastoma, at which point the holes in the coverage become glaringly apparent.

What about those who lack McCain’s coverage

In glioblastoma, Senator McCain is facing a fierce battle, and our hearts go out to him and his family. But thanks to McCain’s health coverage, he won’t have to worry about how to pay for his treatment. I’m glad he has that health coverage.

Senator McCain is not alone in his battle. There are more than 12,000 Americans who will be diagnosed with glioblastoma this year. Unfortunately, many of them do not have the level of health coverage that McCain has. Even with the best health insurance, the diagnosis plunges each family into an immensely challenging situation. With lesser – or no – coverage, the challenge becomes even more insurmountable.

Nobody deserves cancer. And nobody deserves to have to fight cancer with less-than-adequate health insurance. With our current medical know-how, we can’t keep everyone from getting cancer. But we can make sure that as many people as possible are covered by high-quality health insurance. We owe it to all the lesser-known John McCains out there to work towards that goal.

That means pushing back against any sort of “reform” that would result in fewer people with insurance. It also means rejecting proposals that would allow junk insurance plans to flood the market, lulling consumers into a false sense of security – until they’re diagnosed with brain cancer.