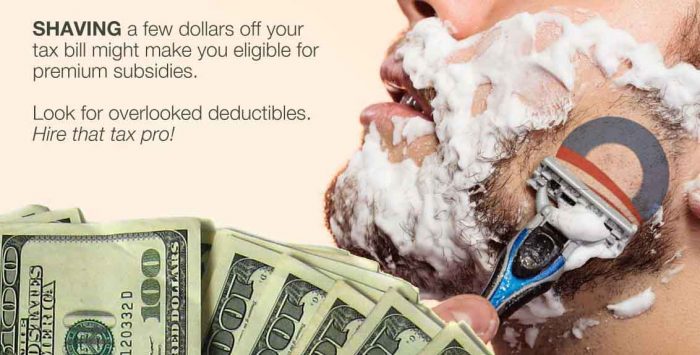 You can reduce your MAGI — and thus increase your subsidy amount — with contributions to a retirement plan, HSA contributions, and self-employed health insurance premiums.

Q. Since a lower income results in a larger health insurance premium subsidy, is there anything I can do to lower my income as far as the exchange is concerned?

A: Your best bet is to talk with an accountant. They are trained to spot places where you might be missing out on deductions and tax breaks, and the money you spend to hire one will be well spent.

That said, there are some basics to keep in mind. And we can start with the fact that the rules are a lot different in 2021 and 2022, as a result of the American Rescue Plan. This legislation, aimed at helping Americans recover from the COVID pandemic, eliminates the “subsidy cliff” in 2021 and 2022.

That means subsidies are available to people with income above 400% of the poverty level (the income cap for subsidy eligibility in prior years) if they would otherwise have to spend more than 8.5% of their income to purchase the benchmark plan.

This makes it less important for people to bring their ACA-specific modified adjusted gross income down to under 400% of the poverty level, as subsidies now extend well above that income level depending on the circumstances. (Older people and people in areas where health insurance is more expensive can have incomes well above 400% of the poverty level and still qualify for a subsidy, whereas younger people and people in areas where coverage is less expensive may still find that they don’t qualify for a subsidy even with an income a little above 400% of the poverty level; this chart shows some specifics that help to make this clear.)

For 2022, the open enrollment period for health insurance continues through January 15, 2022 in most states, although some states have different deadlines. The enrollment window applies both on-exchange and off-exchange, but premium subsidies are only available in the exchange. So if you’re subsidy-eligible (and most people are), you’ll want to make sure you sign up for coverage through the exchange before the end of the open enrollment period.

Although the ARP has made subsidies larger and more widely available, the specifics of how income is calculated under the ACA remain the same. Here’s how it works:

ACA premium subsidies are based on modified adjusted gross income (MAGI), but the calculation for it is specific to the ACA (and different from the general MAGI rules).

For most people, ACA-specific MAGI is the same as adjusted gross income, or AGI (from Form 1040). But if you have any tax-exempt Social Security income, tax-exempt interest income, foreign-earned income or housing expenses for Americans living abroad, you have to add those amounts to your AGI in order to get your MAGI.

You can reduce your MAGI by earning less money, but a lot of people prefer to look for deductions instead. Consider the available deductions on your tax return that are above the line that shows your AGI (this used to be Line 37 on the regular 1040; it’s now Line 11). If you’re not already contributing the maximum allowable amount to an individual retirement account (IRA), doing so would lower your MAGI (it has to be a traditional IRA; contributions to a Roth IRA are not tax-deductible). You and your spouse can each contribute to an IRA, further lowering your total household MAGI. Keep in mind that if you also have a retirement plan at work, the amount of deductible contributions you can make to a traditional IRA depends on your income.

If you have access to an employer-sponsored pre-tax retirement plan like a 401(k), you can contribute to that in order to lower your MAGI. If you’re self-employed, you can set up a self-employed retirement plan. SEP IRA, SIMPLE IRA, or Solo 401(k) are all options — talk with your accountant to see which one will work best for you, keeping in mind that these retirement plans for self-employed people have contribution limits that are potentially much higher than traditional IRAs, making them a good option if you’re trying to reduce your MAGI. Depending on your income, you may also be able to make tax-deductible contributions to a traditional IRA.

If you have an HSA-qualified high-deductible health plan (HDHP), contributing to an HSA (health savings account) will also lower your MAGI. The maximum contribution amount in 2021 is $3,600 if your HDHP covers just yourself, and $7,200 if it also covers at least one other family member. Those contribution limits in 2022 are $3,650 and $7,300, respectively. And you have until April 15 of the following year to make your contributions. So if you had HDHP coverage in 2021, you can make your 2021 HSA contributions anytime until April 15, 2022.

Self-employed people can also deduct their health insurance premiums as a means of lowering their MAGI, but it gets a bit complicated if that’s the factor that makes you eligible for a premium subsidy.

To put all of this in perspective, consider a married couple, each 55 years old, with HSA-qualified health coverage and a combined household income of $80,000. Prior to the American Rescue Plan, this was well above the MAGI cap for premium subsidy eligibility ($68,960 for a household of two in 2021; based on 400% of 2020 federal poverty level numbers). Now that the ARP has been implemented, this couple would be eligible for a subsidy even with a MAGI of $80,000. But we’ll use this example to illustrate how their subsidy will increase if they make various pre-tax contributions.

Let’s say this couple lives in Norfolk, Virginia. In 2022, with the American Rescue Plan’s subsidy enhancements in effect, they qualify for a monthly subsidy of $1,040 if their MAGI is $80,000. But if their income is $58,800, they qualify for a subsidy of $1,268 per month (in order to make contributions to an HSA, they’ll need to buy an HSA-qualified plan, the cheapest of which is about $48/month in premiums after the subsidy is applied).

That’s an extra $228 per month in subsidies, amounting to $2,736 for the year, just because they opted to make the maximum contributions to their IRAs and HSA. And that’s in addition to the normal tax advantage that goes along with those plans, in terms of not having to pay income tax on the contributions, and tax-free growth in the accounts.

Another thing to keep in mind about HSA and IRA contributions: You can deposit money in those accounts at any time during the year or even in the first few months of the next year, as long as you make your contributions before the tax filing deadline.

So if you enroll in an HDHP through the exchange for 2022, you have until April 15, 2023 to contribute to an IRA and/or an HSA (assuming you have an HSA-qualified health plan) and reduce your MAGI for 2022 (premium subsidies are reconciled on your tax return, so that’s when you’d be sorting out the details with the IRS in terms of the exact amount of premium subsidy you were supposed to receive during the year).

Other deductions and their impact on MAGI

There are other deductions that will also serve to reduce your MAGI, since they reduce your AGI and don’t have to be added back to calculate the ACA-specific MAGI. These include things like alimony payments (from settlements executed prior to 2019; alimony from a settlement executed in 2019 or later does not count as income), student loan interest, tuition and fees, moving expenses, and the deductible portion of self-employment taxes. The deductions that reduce AGI are found on lines 11 through 24 of Schedule 1 for Form 1040.

Itemized deductions like mortgage interest, charitable contributions, medical expenses, etc. (or the standard deduction instead) are subtracted after AGI is calculated. So they do not lower AGI and thus do not have an impact on MAGI.

What if you need to increase your MAGI to qualify for subsidies?

On the other end of the spectrum, people living in states that have not expanded Medicaid may need to increase their MAGI in order to qualify for a subsidy, since Medicaid is available in those states on a very limited basis, and premium subsidies in the exchanges are not available to households with incomes below 100% of federal poverty level (FPL). As noted above, the Build Back Better Act would temporarily fix this situation, by providing premium subsidies for people with income below the poverty level, from 2022 through 2025.

Navigators in those states recommend that residents keep track of every penny they earn, even from infrequent jobs. Some residents have been able to cobble together enough income from a variety of sources to get above 100% of poverty, even though the income from their primary job was too low to qualify for subsidies. Things like babysitting, selling extra garden produce, handyman work, and utilizing craft fairs to market a hobby like knitting or woodworking can sometimes make the difference.

If your income is very low and the marketplace is showing that you’re not eligible for Medicaid or any financial assistance with your coverage, you’re probably in the coverage gap. Again, the Build Back Better Act would temporarily fix this situation. But for now, this article is a good summary of how you might be able to avoid the coverage gap.