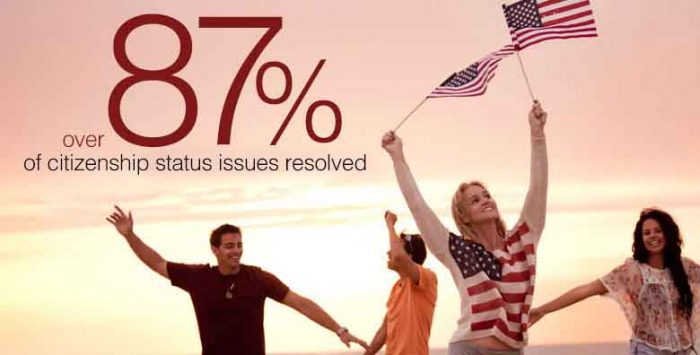 EDITOR’S NOTE: Since last year’s open enrollment period, Charles Gaba has been intently monitoring Affordable Care Act enrollment numbers. In fact, his site, ACASignups.net, is the only site that has consistently been posting enrollment updates … including not only enrollment in state in federal exchanges, but in off-exchange plans, Medicaid/CHIP, SHOP exchanges.

Charles also holds the distinction of being the only analyst we’re aware of who has continued tracking and projecting enrollment outside of open enrollment. We’re thrilled to welcome him as a healthinsurance.org contributor and enrollment analyst.

Remember those 115,000 people who enrolled in QHPs at Healthcare.Gov but had discrepancies with their citizenship or immigration status? Remember how right wingers were gleeful at the prospect of hundreds of thousands of enrollees losing their healthcare coverage if they couldn’t prove legal eligibility by September 30th?

Well, we still don’t know just how many of those folks made the 9/30 deadline, but thanks to a Monday press release from Covered California, we do have some idea of what a likely outcome could end up being.

You see, those 115K were only on the federal exchange, serving 36 states. The state-run exchanges, including CoveredCA (the biggest one) have their own data discrepancies to deal with … and California’s, naturally, had a disproportionate number of citizenship-related ones – more than HC.gov, in fact:

In early September, Covered California sent letters to 98,900 families including approximately 148,000 people to resolve eligibility inconsistencies in their 2014 enrollment documents. Consumers were asked to submit documents showing they are lawfully present in the United States as U.S. citizens, U.S. nationals or individuals with eligible immigration status in order to continue their health insurance through Covered California.

So, the bad news is, that’s over 11 percent of the total number of CoveredCA QHP enrollees.

The good news is that they’ve resolved 87 percent of those cases successfully, with another 6 percent currently being reviewed. (Note to FOX News: “Successfully” means the people were enrolled legally, and don’t have to lose coverage.)

… Covered California announced Monday it has been able to clear the citizenship/lawful presence status of the vast majority of individuals who were sent notices seeking verification documents in September, meaning that pre-termination notices will be sent today to cases involving only 10,474 people.

Yup, that’s right. Instead of 11 percent of CoveredCA enrollees being given the boot, in the end, it will only be 0.8 percent of them … and even then, some or most might be OK in the end if they get their butts in gear after all:

They will be sent pre-termination notices by Covered California starting today. The notices will give individuals information about how they can have their coverage reinstated if they can prove their citizenship/lawful presence status.

Now, there’s no way of knowing whether this ratio (93 percent pass, 7 percent fail) will hold true in the other state exchanges or for the 115K at issue on HC.gov. But if it does, that means that as few as 8,000 people may lose their coverage due to citizenship/immigration issues on the federal exchange.

Add those to the 10.5K in CA, plus perhaps a few thousand more in the remaining states and we could be looking at a loss of coverage for no more than 20,000 enrollees nationally due to immigration or citizenship problems. (I’d imagine that only Colorado, Nevada and New York would have more than nominal numbers in this situation.)

Now, this does still leave around 363,000 people on the federal exchange who had income discrepancies which had to be addressed. Since these issues are likely to show less variation in the state exchanges, there should be roughly 540,000 or so nationally.

However, this isn’t as dramatic of an issue since even in a worst-case scenario, these folks would only lose part or all of their tax credits – not the actual coverage. In addition, in many cases, the error may be in their favor, meaning they could end up receiving a higher subsidy.

In any event, like so many other attacks on the ACA, the “data discrepancy” issue appears to be vastly overstated.