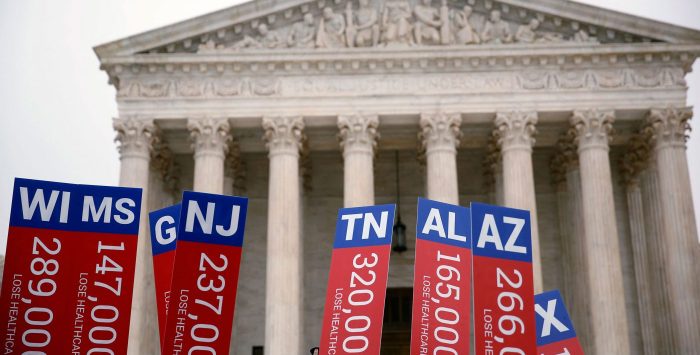 Healthcare activists in Arizona have filed an initiative with the secretary of state that would codify various Affordable Care Act consumer protections into state law. | (March 4, 2015) REUTERS file photo/Gary Cameron

As summer winds down, here’s a look at recent state-based health policy developments:

New Mexico will ban surprise balance billing as of January 2020

New Mexico has enacted legislation to ban surprise balance billing for people with state-regulated health plans that take effect January 2020 or later. The new law will ensure that people only have to pay their in-network cost-sharing amounts if they receive out-of-network emergency care, or are treated by an out-of-network provider at an in-network facility when there was no opportunity to select an in-network provider instead.

Illinois has enacted legislation that will require state-regulated health plans to provide more comprehensive coverage for breast cancer detection. The new law takes effect in January 2020, and will require health plans to fully cover not only screening mammograms, but also diagnostic mammograms, as well as breast ultrasounds and MRIs for some patients.

Amid financial losses and dwindling reserves, Moda exited Alaska’s individual insurance market at the end of 2016. But Moda plans to rejoin Alaska’s exchange for 2020. Alaska’s market is much more stable than it used to be – thanks in large part to the state’s reinsurance program, which debuted in 2017 – and Moda’s finances are stronger than they were in 2016.

Healthcare activists in Arizona have filed an initiative with the secretary of state that would codify various Affordable Care Act consumer protections into state law, end surprise balance billing, and increase wages for most hospital employees in the state. Volunteers will be gathering signatures over the next several months; they need almost 238,000 valid signatures by July 2, 2020, in order to get the measure onto the 2020 ballot.

Medigap plans are designed to cover out-of-pocket costs for traditional Medicare enrollees. Federal rules require Medigap plans to be guaranteed issue during a six-month window when a person is 65 years old and enrolled in Medicare Part A and Medicare Part B. But 16 percent of Medicare beneficiaries are under 65 and enrolled due to a disability, and there is no federal requirement that Medigap insurers offer coverage to these beneficiaries. The majority of the states have established their own rules to ensure at least some access to Medigap plans for disabled beneficiaries, and Indiana will join them in mid-2020. At that point, Medigap insurers in the state will be required to offer at least Medigap Plan A to disabled beneficiaries, on a guaranteed-issue basis.

Last week, we described legislation in North Carolina that would expand access to association health plans. The bill became law this week, albeit without Gov. Roy Cooper’s signature. Cooper expressed concerns about AHPs and noted that North Carolina’s focus should instead be on expanding Medicaid. Full implementation of the state’s AHP legislation still hinges on the outcome of an ongoing federal lawsuit.

At ACASignups, Charles Gaba has spent the summer tracking rate filings that insurers around the country have submitted for 2020. You can see all of the data here, with a comprehensive spreadsheet that includes percentage changes as well as dollar amounts. Keep in mind that rate changes apply to unsubsidized premiums; if you’re getting a premium subsidy, the subsidy amount will change based on the price of the benchmark plan in your area.

Off-exchange enrollment has grown in New Jersey. Here’s why.

New Jersey is thus far the only state in the country that has implemented both an individual mandate and a reinsurance program. (Rhode Island will have both as of 2020.) Yet despite these market stabilization actions, New Jersey had a larger-than-average enrollment drop during the last open enrollment period. However, as Andrew Sprung explains, off-exchange enrollment grew in New Jersey in 2019, as the state’s reforms have served to make coverage more affordable for people who don’t receive premium subsidies. New Jersey plans to take over some oversight of its exchange this fall, and will transition to a fully state-run exchange by the fall of 2020.

Are you curious about the interaction between premiums and subsidies in monopoly markets when prices decrease from one year to the next? Last week, we discussed Delaware’s new reinsurance program that will take effect in 2020. Delaware has only one insurer offering plans in its exchange, so David Anderson has taken a look at how Delaware’s insurer and regulators could work together to create a market that’s not only less expensive for unsubsidized buyers (thanks to reinsurance), but also less expensive for subsidized buyers.