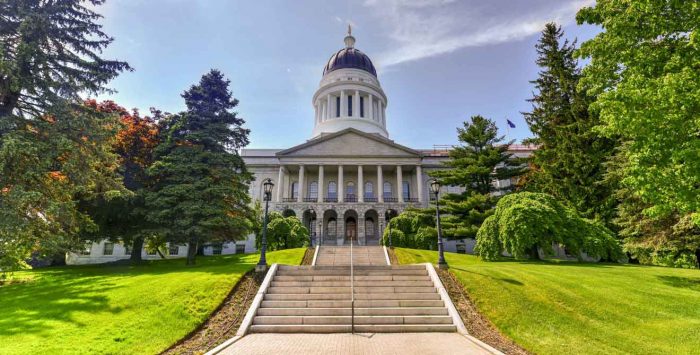 Maine's Bureau of Insurance has also finalized individual market premiums for 2020 and the approved rate changes amount to an average decrease of 13.1 percent. | Maine State House photo by demerzel21 / stock.adobe.com

Maine’s Bureau of Insurance has also finalized premiums for 2020, approving the revised filings that insurers submitted in July. Across the three individual market insurers, the approved rate changes amount to an average decrease of 13.1 percent. The rate decrease is due in large part to the state’s reinsurance program, which took effect in 2019.

Maine is awaiting federal approval to transition to a state-based exchange that uses the federal enrollment platform (HealthCare.gov) as of this fall, and the state is working to implement several other reforms that were called for in legislation enacted earlier this year. This includes the possibility of merging the state’s individual and small-group health insurance markets starting in 2022, and expanding the existing reinsurance program to include the small-group market. (It currently only applies to the individual market).

Rhode Island’s Office of the Health Insurance Commissioner announced approved rate changes for 2021 last week – and in the individual market, the overall approved average rate increase amounts to 4.2 percent. This is a smaller average increase than the insurers had proposed, and the Office of the Health Insurance Commissioner touted this as a win for consumers, amounting to a premium savings of nearly $13 million.

But Rhode Island’s attorney general had recommended much smaller average rate increases based on an independent actuarial analysis, and expressed disappointment when the approved rates were announced. Attorney General Peter Neronha noted that while the Office of the Health Insurance Commissioner consistently approves rate increases that are smaller than Rhode Island’s insurers request each year, “asking for the sun and getting the moon when the moon is really what you want anyway is a win, plain and simple.”

Last week, HHS announced it is awarding $10 million in Navigator funding to 30 organizations across the country that will provide Navigator services to help people enroll in health plans through the federally run marketplace over the coming year. Navigator funding grants used to be much larger – upwards of $60 million in 2016 and 2017 – but have been sharply reduced under the Trump administration. By 2019, Navigator funding had dropped to only $10 million, although it has remained at that level since then.

The 30 organizations awarded the most recent funding are all current Navigator entities, returning for the upcoming year. Although the total funding amount has remained the same, there were 34 Navigator organizations that received federal funding last year. But four of them are not on this year’s list: South Carolina’s Navigator entity withdrew from the program, and the three Navigator entities in Maine and Virginia will no longer be federally funded as of this fall, since Maine and Virginia plan to transition to state-based exchanges using the federal enrollment platform.

California lawmakers have passed a bill designed to improve access to mental health care, particularly inpatient substance abuse treatment. Although state and federal mental health parity laws are already in place, consumer advocates note that they generally don’t go far enough in ensuring that people can actually get the help they need.

Gov. Gavin Newsom has not indicated whether he’ll sign the bill into law. But if he does, it would require broader coverage of mental health and substance abuse treatment, including treatment in the earlier stages of a problem and limitations on claim denials and prior authorization denials based on the insurer’s determination that the treatment is not medically necessary. It would also incentivize insurers to expand their mental health provider networks.

Consumer advocates see the legislation as a win, but the California Association of Health Plans has expressed strong opposition to the bill.

Earlier this year, the Supreme Court ruled that the federal government had to honor its obligation to pay health insurers $12 billion that was owed to them under the ACA’s risk corridors program. The program, which ran from 2014 through 2016, was supposed to take money from profitable insurers and distribute it to insurers that were struggling financially in the early days of ACA implementation.

Initially, the plan was to have the federal government step in to cover losses if there wasn’t enough funding from profitable insurers, but GOP lawmakers retroactively removed that provision in late 2014 (after the first year of claims was in the books and rates were finalized for the second year). Because very few insurers were financially successful in the early years of ACA-compliant coverage, their payments into the risk corridors program were only adequate to cover a small fraction of what the unprofitable insurers were owed.

Georgia is seeking federal approval for a 1332 waiver that would allow the state to stop using HealthCare.gov without establishing its own state-based health insurance exchange platform. Instead, the state wants to rely on its existing web brokers and insurance companies to enroll consumers, despite the fact that these entities would be allowed to display non-ACA-compliant health plans alongside the ACA-compliant options.

Georgia’s current proposal is a scaled-back version of what the state had initially proposed. But a new analysis from  Christen Linke Young and Jason Levitis explains why the state’s current waiver proposal would still run afoul of the federal guidelines for 1332 waivers. HHS is accepting public comment on Georgia’s proposal through September 16.