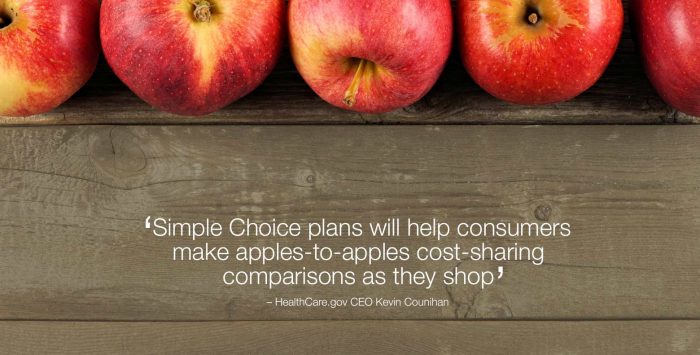 EDIT, 7/1/2021: HHS has issued a proposed rule that would reinstate standardized plans on HealthCare.gov as of the 2023 plan year. In March 2021, in the City of Columbus v. Cochran lawsuit, a court overturned the 2019 rule change that eliminated Simple Choice plans. In order to comply with the court’s decision, HHS will begin the process of once again creating standardized plans. There isn’t time for this to happen for the 2022 plan year, but HHS is collecting public comments on how to best proceed with standardized plan options that will be available in the fall of 2022, for 2023 effective dates.

EDIT, 4/9/2018: HHS has finalized the earlier proposal regarding Simple Choice plans. The federal government will not create any standardized plan options for 2019, so plan designs will be up to insurers, within the general constraints of the ACA and state regulations.

But the agency is not proposing any sort of plan standardization for 2019. The proposed rules note that HHS is concerned that their process of differentially displaying Simple Choice plans in 2017 and 2018 might have limited enrollment in non-standardized plans, thus “removing incentives for
issuers to offer coverage with innovative plan designs.”

In the proposed rule, HHS noted that their focus for 2019 will be on encouraging insurers to offer HSA-qualified high deductible health plans (HDHPs), and they are considering ways that the plan display system on HealthCare.gov could be used to “promote the availability of HDHPs.” So rather than differentially displaying standardized plan options, it appears that HHS is considering ways to differentially display HDHPs.

State-run exchanges that have their own enrollment platforms will still be able to require and/or differentially display standardized plans in 2019 and beyond, regardless of whether HHS finalizes their proposal to eliminate the Simple Choice program.

Last month, HealthCare.gov CEO Kevin Counihan announced that “Simple Choice” plans will be available through ACA’s marketplaces when open enrollment begins in November. In the announcement, he promised that the new plans – “with a uniform set of features” – will make it easier for consumers to compare apples to apples, instead of having to meticulously compare the details of every plan.

In a nutshell, Counihan was talking about the standardization of ACA-compliant health plans – a step beyond ACA’s metal level classifications and standardized essential benefits and toward an even more user-friendly consumer marketplace.

When the Affordable Care Act was written, lawmakers had to walk a fine line between allowing healthcare and health insurance to continue to be provided by private entities, while also including enough government regulations to ensure that coverage and care would be accessible and affordable for as many people as possible.

As a result, we now have a system that still relies on private health insurance carriers, but requires them to follow a new set of regulations. Within this framework, there’s already some basic standardization of ACA-compliant health plans.

Individual and small-group plans must fall into one of four metal-level classifications (Bronze, Silver, Gold, or Platinum; catastrophic plans are also allowed in the individual market), based on the percentage of costs that the plan will cover for the average insured. (This is called actuarial value, or AV.) AV is standardized within a four percentage-point range – so for example, all Silver plans must have an AV between 68 and 72 percent.

All plans cover essential health benefits, annual out-of-pocket maximums cannot exceed $6,850 (this is increasing to $7,150 in 2017), and coverage eligibility no longer depends on medical history.

But in most states, as long as carriers adhere to the ACA’s basic rules, they still have flexibility in how their plans are designed. This is why one Bronze plan can have a $4,500 deductible and another can have a $6,000 deductible, but both are ACA-compliant.

Now that we’re a few years into ACA implementation, policymakers are beginning to question whether there should be more standardization across health plans. Plan standardization is certainly not the norm at this point, but several states have implemented varying degrees of standardization:

For 2017, HealthCare.gov will be debuting standardized plans as well. HHS finalized standardized plan designs for the federally facilitated exchange (FFE) in the 2017 Benefit and Payment Parameters (BPP). Here’s how it will work:

Plans will be standardized based on specific areas of cost-sharing, and some outpatient care will be covered with copays without the patient having to meet the deductible. Areas of standardization include the deductible, out-of-pocket maximum, office visits (including mental health, primary care, and specialists), urgent care, emergency room visits, inpatient hospitalization, lab work, x-rays and imaging, rehabilitative care, outpatient surgery and facility fees, skilled nursing, and four tiers of prescription drugs.

So for example, all standardized Gold plans will have a $1,250 deductible and $20 primary care visits. (See page 309 of the BPP for a complete list of the cost-sharing for each standardized plan.)

For benefit areas that aren’t specifically addressed in the standardized plan design (including things like embedded pediatric dental, habilitative care, and inpatient behavioral health treatment), carriers will be free to set their own cost-sharing levels, as long as they meet the AV guidelines and comply with existing requirements such as mental health parity.

The plans are pretty similar to what’s available today across a broad swath of the marketplace. In announcing the standardized plan designs, HHS explained that they “designed the plans to be as similar as possible to the 2015 QHPs … in order to minimize disruption to the market and impact on premiums.”

How to find the plans

A blog post from CMS about Simple Choice plans (since removed) notes that the plan-comparison tool will have “clear visual cues that show consumers the plans that are easy to compare vs. the ones that should be researched for differences” (with the caveat that there will still be differences among standardized plans, including networks and formularies).

If that’s the case, we can assume that carriers may make their decision about whether or not to offer standardized plans based on whether they’re trying to gain market share in the exchanges (some carriers have indicated that they aren’t, while others clearly are), since plans that are displayed first tend to be more likely to be purchased.

The debate over standardization

Some consumer advocates have called on HHS to transition to mandatory standardized plans as quickly as possible, making HealthCare.gov more like Covered California. Others have resisted this idea, claiming that standardized plan designs stifle carriers’ ability to use innovative plan designs to lower costs and thus lower premiums.

Numerous lawmakers sent a letter to CMS, expressing their concerns that standardized plan designs and their prominent display on HealthCare.gov could stifle innovation and consumer choice, and might “pick winners and losers by propping up plans that meet arbitrary requirements … ”

There are certainly compelling reasons for transitioning to standardized plans in the exchanges. Standardized plan designs make it easier for consumers to compare the available options, and also tend to include copays instead of coinsurance for frequently used services. (Consumers generally prefer copays as it can be difficult to plan for a percentage of an unknown cost.)

Standardized plans also make it harder for insurance carriers to design their plans to be unappealing to chronically ill enrollees. Health Affairs’ Douglas Jacobs has laid out a good case for how standardized plans reduce discrimination against people with significant health conditions, although it’s worth noting that the standardized plan states in the study – California, New York, and Massachusetts – all had strict regulations in terms of cost-sharing for specialty medications (and California has since capped specialty drug costs at $250/month, instead of using coinsurance).

Standardized plans on HealthCare.gov in 2017 will not have the sort of limits used in states like California, New York, and Massachusetts; instead, specialty drugs will have coinsurance ranging from 45 percent on Bronze plans to 30 percent on Gold plans. (Silver plans with cost sharing subsidies will have specialty drug coinsurance ranging from 25 percent to 40 percent, depending on the enrollee’s income.) And carriers will still be able to determine their own formularies, as long as they remain in compliance with ACA regulations.

So while the improvements that Health Affairs found in terms of discrimination will no doubt translate to some degree to standardized plans offered through HealthCare.gov, it’s doubtful that the impact will be as significant as it is in states that have imposed stricter limits on specialty drug costs.

It’s important to note that not all aspects of the plan’s benefits will be standardized, and there will continue to be significant variation in provider networks and drug formularies – consumers will still have to be diligent in their shopping, but the Simple Choice plans are an effort to make it easier.

There are concerns that premiums could increase if standardization requirements include numerous services covered with copays without being subject to the deductible. But at the same time, high deductibles with few covered services prior to the deductible sometimes mean that people can’t afford to use their coverage; the key is to find the happy medium somewhere in the middle.

The standardized plans that HHS has created appear to do that. Several services (primary care, specialist visits, outpatient mental health, and urgent care) are covered with copays prior to the deductible on most of the plans. But the deductible applies to most other services, which seems like a solid compromise to keep both premiums and treatment affordable.

California’s exchange, which has had standardized plans from the start, has experienced very modest average rate increases in 2015 and 2016. And for 2016, the average benchmark premium in Los Angeles is lower than average benchmark premiums in major metropolitan areas in 38 other states (although average premiums are higher in Northern California). For 2017, the proposed average rate increase for California’s exchange plans is the third-lowest of the 29 states where proposed rates have been published.

And Medicare supplement (Medigap) plans are an example of a highly standardized market: in all but three states, Medigap plans are universally standardized (Minnesota, Massachusetts and Wisconsin have their own standardization rules). And there’s no difference in networks for Medigap plans; as long as the patient sees a Medicare participating provider, the Medigap plan will pick up the excess charges according to the plan design.

Medigap plans only differ in terms of how they’re priced and the quality, reputation, and brand recognition of the carrier. And yet there’s still a booming business for brokers who assist consumers with the Medigap selection/enrollment process.

Regardless, HHS has indicated that some level of plan standardization is in consumers’ best interest. When window shopping for next year’s plans becomes available in the fall, we’ll be able to see whether carriers are emphasizing standardized plans for 2017. And then it will be up to consumers to determine whether the standardized plans fit their needs and budgets, and whether they make the shopping process easier.