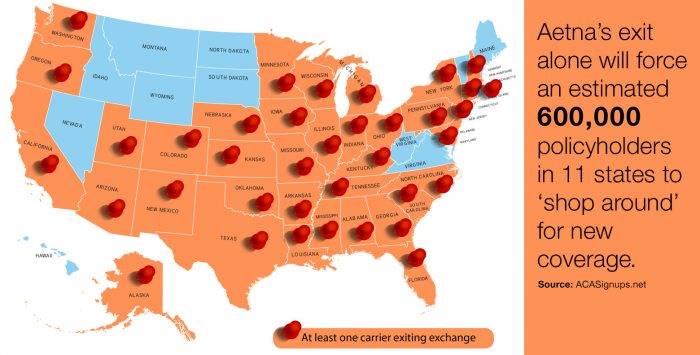 Headlines about health insurers exiting the Affordable Care Act’s exchanges have been appearing at a rapid pace this summer. Some of the carriers – like Aetna, Humana, and UnitedHealthcare – have made national news with their decisions to withdraw, while others carrier exits have drawn less attention.

If you’re curious about what’s going on in your state, we keep track of each state’s exchange here.

Some states are being hit worse than others by the carrier exits. For example, at least four carriers are exiting the Arizona exchange – and Pinal County Arizona currently has no carriers slated to sell exchange plans at all in 2017. Wyoming, Oklahoma, Alabama, and Alaska are all expected to have just a single carrier in their exchanges in 2017. But New York’s exchange has 14 carriers that will be offering plans in 2017, and only one carrier leaving the exchange.

Who’s backing out and where?

HealthyCT and InHealth Mutual are ACA-created CO-OPs that managed to survive into 2016, but will close at the end of the year. (InHealth Mutual members were allowed to transition to new carriers in the summer of 2016, but those who opted to remain with the CO-OP can keep their coverage until December 31, albeit with reduced coverage limits.)

There are two other CO-OPs that failed in 2016 prior to the end of the year: In Illinois, Land of Lincoln is closing September 30, and in Oregon, the remaining CO-OP closed July 31.

What kind of health exchange does my state offer?

Humana, on the other hand, is dropping “substantially all” of its off-exchange business, but remaining in several exchanges. The carrier is planning to continue to offer coverage in 11 states – down from 19 – but the total number of counties in which they offer coverage will shrink by 88 percent at the end of 2016.

And while some states – like Georgia – are seeing carriers retreating from rural areas and remaining in urban areas, other states – such as Arizona – are seeing the opposite.

In short, there’s no single strategy that applies here. And while the trend is certainly towards a reduction in the number of carriers offering plans in the exchanges, some states – like Iowa – will have new carriers joining their exchange for 2017.

How many people are impacted?

At ACA Signups, Charles Gaba has estimated about 1.8 million exchange enrollees will be impacted by the departure of Aetna, United, Humana, and the four CO-OPs.

But there are 10,000 people with Presbyterian plans in the New Mexico exchange, and 12,200 people have exchange plans through Health Choice in Arizona.

In Alaska, Moda has 14,000 individual-market enrollees, including on- and off-exchange, and in Oregon, Lifewise has a combined individual market membership of 18,000.

Although none of these carriers have the level of total exchange volume as the big insurers that are exiting numerous exchanges, their exit will certainly have an impact on their members.

It’s worth noting that there are many states where carriers are reducing their coverage area, but technically remaining in the exchange. For example, in Arizona, Blue Cross Blue Shield of Arizona and Health Net are both exiting Maricopa and Pinal counties at the end of 2016. They’ll still offer exchange plans in other parts of Arizona, but their exit from the Phoenix area means that about 58,000 people will lose access to their current plans.

And in Minnesota, Blue Cross Blue Shield of Minnesota is dropping their individual PPOs. The parent company will still have their HMOs available through Blue Plus, but about 103,000 people will need to switch to a new plan.

What happens if my carrier exits?

If your carrier is exiting the exchange – or the entire individual market – you’ll need to shop around for a new plan during open enrollment. If you don’t pick a new plan by December 15, the exchange might pick one for you.

Under new HHS guidelines for 2017, the exchange will “endeavor to” automatically re-enroll you into a plan from another exchange carrier that’s the closest match to the coverage you had previously. (This post explains more about how that process works, and the changes that apply for 2017.)

Although Aetna will continue to offer off-exchange plans in most of the areas where it offers coverage today, you won’t be automatically switched from an on-exchange Aetna plan to an off-exchange Aetna plan. You’ll have that option, of course, if you want to remain with Aetna (without subsidies, since those aren’t available outside the exchange).

But the guidelines for 2017 clarify that automatic re-enrollment (as opposed to manual re-enrollment that the applicants do themselves) for people on-exchange plans must be to another exchange plan, even if that means switching to a different carrier.

In short, HHS has implemented a protocol for ensuring – as much as possible – that policyholders won’t find themselves uninsured on January 1 if their carrier is leaving the exchange. But if your carrier is leaving the exchange and you’d like to have a say in what plan you get for 2017, it’s essential that you log back into your exchange account once open enrollment begins, and select your own plan. You can seek out help with this process, and there’s no charge for professional assistance. If you reach out to an exchange-certified broker for help, you can assign that person as your broker in your account, and he or she will be able to help you determine which replacement plan will work best. You can also switch to an off-exchange plan if you prefer, but keep in mind that subsidies aren’t available outside the exchange, so you’ll only want to go that route if you’re not eligible for a subsidy.