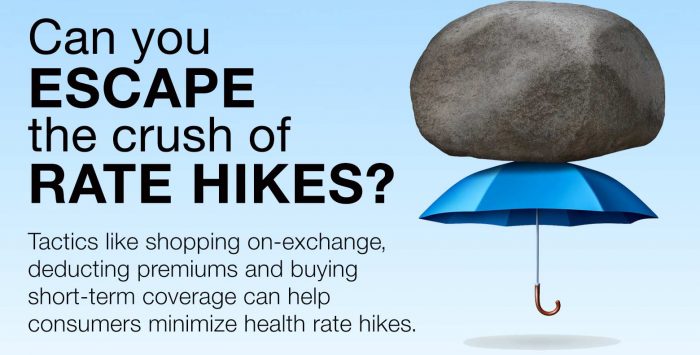 EDITOR’S NOTE: This article is the second of a two-part look at recent premium increases on the individual health insurance market. Read Part 1: Who’s bearing the brunt of rate increases?

In most parts of the country, individual health insurance premiums will be significantly higher in 2017 than they were in 2016. The vast majority of Americans will not be impacted by those rate increases though, since most people either have coverage outside the individual market, or are receiving subsidies to offset the cost of individual market coverage.

But what about the roughly 4 percent of the U.S. population that purchases individual health insurance without any insulation from the spiking rates? As I explain here, this includes people who buy individual market coverage outside the exchanges, as well as people who shop in the exchanges but with income too high to qualify for subsidies. For these folks, there’s no doubt that the 2017 premiums will cause some sticker shock.

This is particularly true for people with income a little above 400 percent of the poverty level, but not dramatically so: If you’re earning $1,000,000 a year, an extra $700 a month for your family’s health insurance premium probably isn’t too hard to absorb into the budget. But if you’re earning $100,000 a year, you’re likely to feel the pinch.

Although there’s no magic bullet for fixing this situation at the moment, there are a handful of strategies to consider if you’re facing health insurance premiums that are rapidly becoming unaffordable:

1. Shop where you can save.

Subsidies are designed to keep coverage affordable, regardless of premium changes from one year to the next. But if you’re shopping outside the exchange, you don’t get any protection from rate changes. HHS has estimated that there are 2.5 million people currently covered by off-exchange plans, who would be eligible for subsidies if they switched to exchange plans.

2. Talk with an accountant about your MAGI.

If your income is just a little above 400 percent of the federal poverty level, you might be facing a significant “subsidy cliff” depending on where you live and how old you are. In cases like that, it’s wise to discuss your situation with an accountant, to see if you can get your Modified Adjusted Gross Income (MAGI, which is ACA-specific) down to a subsidy-eligible level. Contributions to a Traditional IRA are one possibility, as are contributions to an HSA.

Keep in mind that in order to contribute to an HSA, you must have an HSA-compatible High Deductible Health Plan (HDHP) in place – and yes, those plans are still available now that the ACA has been implemented. So if you’re going to want to contribute to an HSA as a way of lowering your MAGI in 2017, you’ll need to focus on HSA-compatible plans when you’re shopping for coverage during open enrollment.

3. See if you can deduct your premiums.

If you’re self-employed, you can deduct your health insurance premiums. But what about all the people who work for small businesses (that are not required to offer group health insurance under the ACA) and have to buy their own coverage? People in that situation can’t just deduct their premiums the way they could if they were self-employed. But if they itemize deductions, they can deduct medical and dental expenses that exceed 10 percent of their adjusted gross income. Health insurance premiums count as medical expenses.

Especially with the sharp premium increases that are coming for 2017, it will become more and more common for people with incomes just a little above the subsidy-eligibility threshold to be spending more than 10 percent of their income just on premiums. This is an area where it’s wise to talk with an accountant, because itemizing deductions might not be the best solution for your situation.

But if you are going to itemize deductions, keep careful track of all your medical and dental expenses. (Here’s a full list of what you can count. Note that you can’t “double dip” by counting premiums that were paid by an employer or a premium subsidy. The IRS also has a tool that helps you figure out whether your medical expenses are deductible).

The ACA has overhauled the entire individual health insurance market, so major medical plans sold both on and off the exchanges are compliant with the ACA’s requirements. But there’s a range of products that aren’t regulated by the ACA. They offer coverage that’s much less robust than real major medical health insurance, but they also come with lower premiums. It’s a trade-off.

That said, here some options if you’re considering a plan that’s not regulated by the ACA:

Going without coverage is a risky proposition, and one I’d never recommend. Even the healthiest among us can be hit with sudden, catastrophic medical bills, and being without health insurance in situations like that can lead to financial ruin, not to mention much poorer medical outcomes.

But if you’ve determined that premiums are unaffordable and you simply are not willing or able to pay for your coverage anymore, you may be able to avoid the ACA’s individual mandate penalty if the IRS agrees that coverage is not affordable for you.

Here’s how it works: If the lowest-cost Bronze plan you could get in the exchange would cost more than 8.16 percent of your household income in 2017, you’re exempt from the ACA penalty – even if you remain uninsured. You can claim the exemption through the exchange based on your projected income, or you can claim it when you file your tax return, based on your actual income.

But you have to account for subsidies in that calculation. (That was the crux of the King and Halbig cases, since without subsidies, coverage would have been considered unaffordable, but the subsidies made it affordable instead.) So if you’re buying coverage outside the exchange but you’re among the 2.5 million people that HHS estimates would be eligible for subsidies if they switched to the exchange, you can’t claim the affordability exemption based on your off-exchange premiums.

But assuming the lowest-cost Bronze plan you could get in the exchange would be more than 8.16 percent of your 2017 income even after accounting for any possible subsidies, you can claim an exemption from the penalty if you go without coverage.

For people contending with the subsidy cliff – typically older, living in areas where premiums are highest, and with income a little above 400 percent of the poverty level – it won’t be uncommon to see lowest-priced Bronze plans costing more than 8.16 percent of income in 2017.

If you’re in the small segment of the population that’s bearing the full brunt of the individual market rate increases for 2017, there’s no denying the fact that the outlook is currently pretty bleak. But state and federal regulators are working with insurers to come up with possible solutions – such as the proposal to limit short-term plans and the restriction of special enrollment periods – in order to keep the risk pools for ACA-compliant plans as healthy as possible.

At this point, the consensus is that myriad changes will have to be made in order to stabilize the individual insurance market long-term. This article is intended to help in the short-term, if you’re between a rock and a hard place in terms of affording your coverage in 2017.