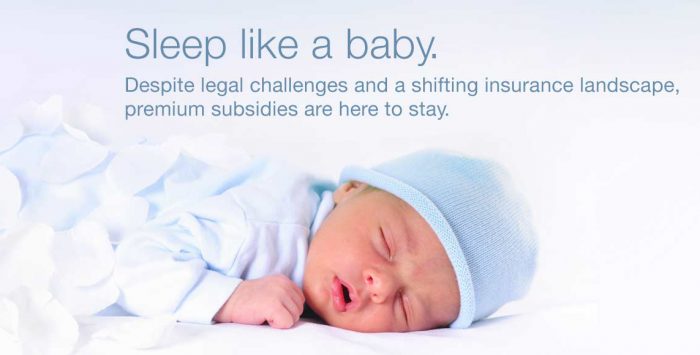 The ACA’s premium subsidies are a cornerstone of the law, and are the primary means of making health insurance affordable for the majority of the exchange’s enrollees.


Of the people who enrolled in health plans through the exchanges as of early 2021, 86% received premium subsidies that averaged $486/month, which amounts to 84% of the average monthly premium. (The specific amounts vary considerably depending on where a person lives and how old they are).

And subsidies have become larger and more widely available since then, thanks to the American Rescue Plan. Given the huge role that subsidies play in keeping coverage affordable, it’s understandable that people wonder about their long-term prospects.

This article was initially written in 2014, when there was a considerable amount of anxiety surrounding the King v. Burwell case. People in states that use the federally-facilitated exchange (which is the majority of the states) were understandably concerned that their subsidies might be taken away, as that was the premise of the case. Ultimately, the federal government won the case in the summer of 2015, and subsidies continued to be available without interruption.

But similar anxiety has resurfaced multiple times over the last few years, including during Congressional Republican’s efforts to repeal the ACA in 2017, and then in response to the California v. Texas lawsuit, in which the Trump administration and 18 GOP-led states attempted to overturn the entire ACA.

The Supreme Court ultimately ruled in favor of the ACA in that case, which was the third time the Court had upheld the ACA (the other cases were in 2012, and then the King v. Burwell cas in 2015). So subsidies and the rest of the ACA’s consumer protections have remained in place, and the Supreme Court is unlikely to hear additional cases that seek to overturn the ACA altogether (although they may still hear cases about various aspects of the law, like this one).

The ACA is doing quite well at this point, nearly eight years after the bulk of its provisions were implemented. Although there were spiking premiums and numerous insurer exits from the exchanges for 2017 and 2018, we’ve seen the opposite trend for the last few years. For 2019, 2020, and 2021, overall average premiums have been very stable (average benchmark premiums declined in each of those three years), and the number of insurers participating in the exchanges has been steadily growing.

So let’s revisit the question: Can you count on your Obamacare subsidies? In short, yes. But let’s take a look at some common questions that people have about this issue:

What happens to subsidies after the ARP’s provisions expire?

Consumer advocates and many lawmakers are supportive of additional legislation that would make the ARP’s subsidy enhancements permanent. That would involve the permanent elimination of the “subsidy cliff” (currently eliminated through the end of 2022) and the extension of the rules that have reduced the percentage of income that people have to pay for the second-lowest-cost Silver plan.

If Congress does not extend the ARP’s subsidy provisions, subsidies will shrink in 2023 and there will once again be a “subsidy cliff,” with households that earn more than 400% of the poverty level becoming ineligible for subsidies (regardless of how much of their income they have to pay for their coverage). We’re optimistic, however, that Congress will address this in order to keep coverage affordable. If this is important to you, we encourage you to reach out to your elected officials and let them know your thoughts.

What if your carrier is leaving the exchange?

In many areas of the country, insurers are joining the exchanges for 2022 and there will be more plan options available than there were in 2021. But there are some insurers that are exiting the market at the end of 2021, such as Providence in Washington. This is much less common than it was at the end of 2016 and 2017, but it does still sometimes happen.

There are a couple of things to keep in mind if you’re currently receiving a subsidy to help cover the cost of your plan, and your carrier is exiting the exchange at the end of the year: