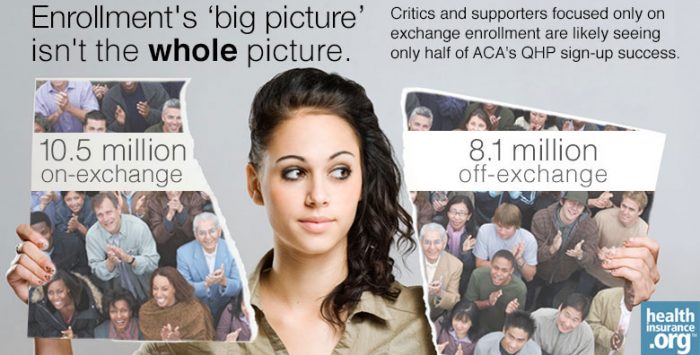 UPDATE: I noted below that 55 percent of Washington State’s QHPs were off-exchange last spring. I’ve learned today that this was still the case as of late November.

Last spring I was shouting from the rooftops about off-exchange QHP enrollments at a time when most reporters (and especially ACA opponents) seemed to be under the impression that ACA’s exchanges were the only game in town when it came to individual/family healthcare policies. Apparently, they thought that starting on Jan. 1, 2014, no one was allowed to simply call up Blue Cross, Aetna, etc. directly and sign up for a private policy without running it through the Obamacare web sites.

In fairness, there are two exchanges where this situation did go into effect: The District of Columbia (which started requiring this out of concern that their exchange pool wouldn’t be large enough otherwise) and Vermont (which did so for the same reason, in addition to being part of their ongoing move towards Single Payer … although that larger move has unfortunately been put on hold in recent days).

In every other state, however, plenty of people are bypassing the exchanges altogether and enrolling directly through the insurance companies … and why wouldn’t they? If your income is above the ACA tax credit threshold, there’s very little incentive to jump through those extra hoops, even if the process is much smoother than it was last year.

That’s why only about 15 percent of the exchange-based enrollees fall into this category; everyone else at the higher income threshold just called up a carrier directly.

As I noted, prominent ACA opponents such as Avik Roy were pooh-poohing the idea that there were significant numbers of people enrolling in off-exchange, ACA-compliant policies. They claimed that it was “not a big number” and that I was “overstating” the number (and this was back in mid-March, when I had arleady confirmed around 560,000 off-exchange policies out of around 5.6 million on-exchange).

Needless to say, Roy was utterly full of nonsense. I eventually officially confirmed nearly 2.5 million off-exchange QHPs for 2014 from about a third of the states, and institutional estimates for the national total were far higher – a minimum of 5 million according to the CBO, and nearly 8 million according to the RAND Corporation. The RAND number was closer to my own estimates, so that’s what I went with for the rest of the year.

This estimate is also supported by Mark Farrah Associates (thanks to Ken Kelly for the link), which notes that according to the Department of HHS (in the same “ASPE brief” which gave their official target of 9.1 million paying exchange-based QHPs), “In addition to the uninsured, HHS includes an estimated 8 to 12 million people who already have off-Marketplace coverage in the total addressable market.”

Remember, that “8 to 12 million” includes up to 4 million “grandmothered” policies extended by HHS / President Obama after the “You can keep your plan” brouhaha, so 8 million compliant off-exchange policies last year seems to be pretty close to the mark.

Oregon is, unfortunately, one of the states which decided to allow non-compliant policies to be extended out until the end of 2015. The odds are that the vast majority of the 63,000 off-exchange enrollees above are in fully ACA-compliant policies by now, but some of them may not be. Assuming they all are, that’s 81,000 exchange-based, 63,000 off-exchange, or around 44 percent of the combined total.

However, this is a huge assumption for several reasons:

Who else is looking off-exchange?

Fortunately, this estimate is supported by none other than the RAND Corporation, which estimates that  19.8 million people will enroll in the ACA-compliant individual market in 2015 “including those enrolled on and off the Marketplaces.”

Since they’re talking about actual paying/effectuated enrollees, we have to subtract the non-paying and dropped-later-in-the-year numbers, which brings my own estimates down to: 10.5 million exchange-based (out of 12.5 million total) + 8.1 million off-exchange (out of 9.6 million total), or 18.6 million by the end of the year (out of 22.1 million total).

Yep, that’s right: My own estimates are actually more conservative than the RAND Corporation here … but they’re both in the same ballpark.