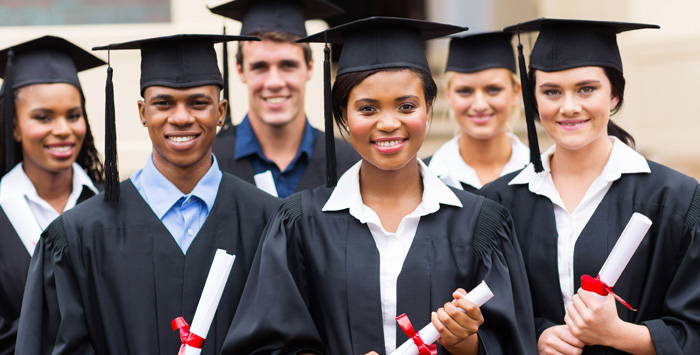 As college graduation arrives, many college seniors are busy planning their next moves – to a new home, a new job, perhaps a new city. And while those transitions all involve careful consideration, college graduation very often brings another critical transition: New health insurance coverage.

Since the passage of the Affordable Care Act (aka Obamacare), choosing new coverage – or holding on to existing coverage – has been much easier for college grads. Young adults are much more likely to be insured than they were before the ACA was enacted, and are the age group that has seen the largest reduction in uninsured rates.

But young adults are still known as the “young invincibles” – less concerned about catastrophic health costs and, as a result, not always convinced that purchasing health insurance is a good value.

While young adults may consider health insurance premiums an unnecessary expense, many don’t realize that “going bare” can be costly – no matter how healthy the person is. Since 2019, there hasn’t been a tax penalty for going without health insurance, but even when the penalty was in place (from 2014 through 2018), it paled in comparison to the real penalty: Attempting to pay for a serious medical event without health coverage.

At Vox, health reporter Sarah Kliff is spent well over a year collecting emergency room bills from across the country, and the reports are an eye-opening look at just how much it costs when people end up needing emergency treatment – which can happen to anyone, regardless of how healthy they are. A five- or six-figure medical bill would be crippling for most young people, especially on top of the student loan debt many graduates are struggling to pay off after college.

More coverage choices than ever for grads

The good news for grads is that there are more coverage options than ever – some offering low premiums, others offering more medical benefits, and others offering a combination of the two.

Here’s a quick primer on the most logical and obvious coverage options that will help ensure recent graduates can avoid a coverage gap. (We’re listing these numerically, and not “best to worst” or vice versa. It’s up to each graduate to weigh factors that include employment, availability of a parent’s plan, etc.)

1. Remain on your parent’s insurance

Before the ACA was enacted, it was common for health insurance plans to drop dependents as soon as they graduated from college. But the ACA changed that, requiring almost all health plans (with the exception of retiree-only plans) that offer dependent coverage to allow young adults to remain on a parent’s plan until they turn 26. So for young adults with coverage under a parent’s plan, graduating from college no longer requires a mad scramble to find new health insurance.

Under the new rules, there are no strings attached. The young adult doesn’t have to be a student, doesn’t have to be on the parent’s tax return, and can even be married and living on the other side of the country – although in that situation, it might be wise for them to purchase their own health insurance, since the provider network of the parent’s plan might not cover them if they live far away.

There are several points to consider before deciding whether remaining on a parent’s plan is the best course of action, and we cover them in more detail here.

Under rules that were finalized by the Trump Administration in 2018, short-term plans can be offered with initial terms of up to 364 days, and total duration, including renewals, of up to three years.

But each state has the option to set more restrictive rules, and the majority of the states have done so (either defaulting to rules they’ve had in place for years, or establishing new rules in response to the newly-relaxed federal rules). Depending on where you live, you might find 364-day short-term plans available, or you may find that all of the available options are limited to three months or six months, or that short-term plans simply aren’t available at all.

Applicants should be aware that short-term plans do not cover pre-existing conditions, are not guaranteed-issue (ie, an applicant can be declined due to medical history), and do not have to cover the essential health benefits. Short-term plans generally don’t cover maternity care, prescription drugs, or mental health care, for example. But for a healthy person who just needs a few months of coverage before a new plan takes effect, a short-term plan could be just the right solution, at the right price (short-term plans tend to be inexpensive, since they don’t have to comply with the ACA’s rules).

And unlike ACA-compliant plans, short-term plans can be purchased at any time of the year, with immediate effective dates available.

For new grads who want a more robust, ACA-compliant plan that does cover the essential health benefits and pre-existing conditions, a plan purchased through the state health insurance exchange is likely to be an ideal solution.

ACA-compliant plans for individuals are available in every state, (some states run their own exchange, but most use HealthCare.gov). And premium subsidies and cost-sharing reductions are available through the exchange to make coverage and care more affordable.

Premium subsidies became larger and more widely available in 2021 as a result of the American Rescue Plan, and those enhanced subsidies are still available in 2022 (they could be extended into future years, but that would require Congressional action). Premium subsidies can help to make coverage affordable, especially for people working part-time jobs or working for a small business that doesn’t offer group health benefits.

(Caveats: People with income below the federal poverty level generally aren’t eligible for subsidies, which results in a coverage gap in the states that have refused to expand Medicaid. And if a young adult is still claimed on a parent’s tax return, the parent’s income would also be taken into consideration for subsidy-eligibility determination.)

But unlike short-term plans, ACA-compliant plans cannot be purchased outside of open enrollment if the applicant does not have a qualifying event.

In 38 states, Medicaid has been expanded to cover all adults with income up to 138% of the poverty level. In 2022, that’s $18,754 for a single individual (the limit is higher in Alaska and Hawaii).

Medicaid enrollment is available year-round, and Medicaid does cover pre-existing conditions. In most cases, there are no premiums. For a new grad living in a state where Medicaid has been expanded, this could be a perfect solution during the weeks or months that it might take to find a job after graduation.

In New York and Minnesota, there’s also an option for very low-cost coverage for people who earn too much for Medicaid, but are still fairly low-income. Both of those states have Basic Health Programs (BHPs), available to individuals earning up to 200% of the poverty level (in 2022, that’s more than $27,000 for a single person). In New York, the BHP is called The Essential Plan, which has no monthly premiums. In Minnesota, the BHP is called MinnesotaCare, and enrollees pay between $0 and $28 per month (most enrollees pay no more than $15 or $21 per month, and many pay $0 or $4).

5. Get coverage through a new employer

Getting health coverage through an employer is probably the path that most college grads envision, and it’s an excellent option if it becomes available. Employer-sponsored health insurance generally offers substantial benefits, and employers typically pay a large portion of the premiums.

But while obtaining employer-sponsored health insurance may be the goal for many new grads, it won’t necessarily happen right away, or even in the near future. Thanks to the ACA, it’s easier than ever for young adults to have health insurance coverage, even if the benefits they assumed they’d receive from employers take longer than expected to materialize.